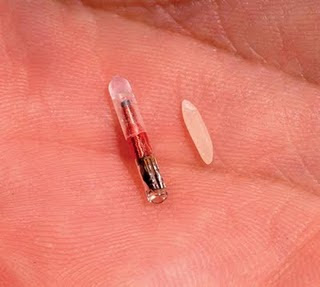 The Bike-sharing Blog has its finger on a scoop that no other media outlet has been able to obtain. Forty-six years after the innovative concept of bike-sharing was first created, the fourth generation of bike-sharing has finally arrived!

No more smartcards, mobile phones, or keys are needed with this new technology as all it requires is a chip which is implanted into the customer’s skin. Germany’s Call a Bike system is taking advantage of Canada-based Melanin, Inc.’s high-tech innovation, the IntelliFreckle. The IntelliFreckle is the size of a grain of rice and can be inserted under a customer’s skin through a painless air pump, found at each station.

Deutsche Bahn, the provider of Call a Bike is the first to integrate this biochip into its service to be used in 68 cities where its offerings are already in place. The new service is to be called “Rub a Bike”, named after the action a customer with the biochip must do in order to rent one of the fleet’s bicycles.

To unlock a Rub a Bike, one must rub the body part with the inserted chip directly over the RFID reader on the dock in any stand where a bicycle is parked. A thumbs up image is displayed on the dock with five seconds of the 1984 hit tune “99luftballons” played from speakers on the bike which will signal to the customer that their identification has been accepted and the bike is ready for use.

With the technology being new, there is a rub with some aspects which still are being tweaked. For example, clothing can get in the way of the dock’s reader and the IntelliFreckle chip, so the manufacturer recommends inserting the chip into a location on the body that is not normally covered by clothing. IntelliFreckle’s inventor, Hugh G. Mole, who graduated from McGill University in Montreal stated, “The buttocks and torso are generally not good locations for the chip. The back of the hand works very well, however, due to its extended nature, it seems the middle finger works the best.”

Happy April Fools’ Day from The Bike-sharing Blog! This blog post is a joke, but probably will be true someday.

Posted by Paul DeMaio at 12:01 AM Labels: IntelliFreckle

Ha ha ha , this is very funny, but we at Tagstracks, have the little bigger TAG ready in Denmark for tracking bicyckles, life saving jacket, laptop, etc. or even for behaviour of shoppers in a shopping mall, and next year we will be able to reduce the allready small size to app. 1 x 2 cm

I am brand new to your blog and this completely freaked me out!!! Of course, now I'm going to send it to my husband and see if I can shake him up a little. Very clever...but a bit sick.

If it was the size of a sesame seed it just might work!