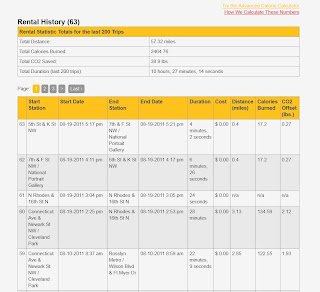 One month before its first birthday Capital Bikeshare has released a new feature on its website that allows members to review total distance, calories burned, and carbon footprint reduction for their 200 most recent trips. The distances are measured "as-the-crow-flies" in a straight line between stations. B-Cycle also boasts personal profile pages in its nine bike-sharing operations across the country. Distance in these programs is measured by a GPS device located within each bike, from which calories burned and carbon avoided are extrapolated. Members can also track the duration of their trips, allowing them to see where they may have accumulated any fees. 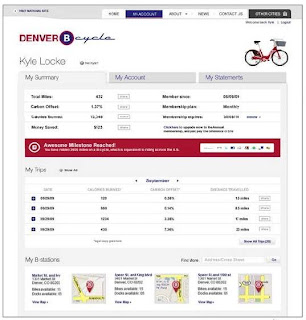 For those without a local bike-share, B-cycle offers the B-effect, where any individual can enter his/her zip code to find out what a B-cycle bike-share would look like in their city. B-effect uses the population of a city to determine how many "B-stands" and cycles it would need, but also calculates how many calories burned, pounds lost, carbon emissions reduced, money saved, and traffic reduced would result from just 10% of that city’s population using the service for only 30 miles. While a 10% bike mode share is enviable for ALL American cities and most around the world, by the time the B-effect page asks "Want B-cycle in your community?", it has already built quite a convincing case.
image credit: B-cycle
Posted by Jesse Luca Simmons at 6:00 PM No comments: Labels: B-cycle, B-effect, Capital Bikeshare

This September, Medellín, Colombia will unveil 160 public bicycles in the form of a pilot bike-sharing program. The bikes, featuring GPS tracking software and swipe card stations, cost the city about $500 each and will be free to use for up to 30 minutes from 5:30am to 7:30pm. The bikes were developed by three engineering students at Eafit University, who have dubbed their bikes "Bici K". The service is modeled after Santiago’s successful bike-sharing program, where users can sign up online or at one of the automated kiosks. The program will cut down on operational costs by partnering with the local Eafit University, from which 20 – 30 students will be hired to help manage the program.

In 2008, the District Council of Bogotá, the capital and largest city in Colombia, passed Agreement 346 to establish a bike-sharing service, "Bike-Bogota", but in the two years since, there has yet to be a feasibility study. If Medellín’s system’s is assessed as a success in December, it will expand with more bikes and more stations. Hopefully, this will help encourage Bogotá to take action on its mandate.
Posted by Jesse Luca Simmons at 10:12 PM No comments: Labels: Bici K, Bogotá, Columbia, Eafit University, Medellín 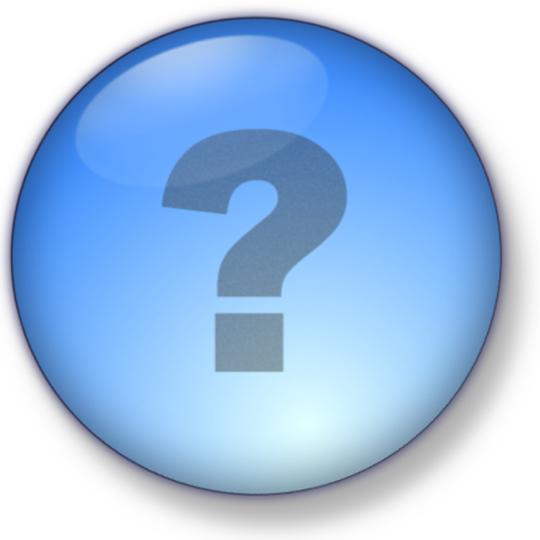 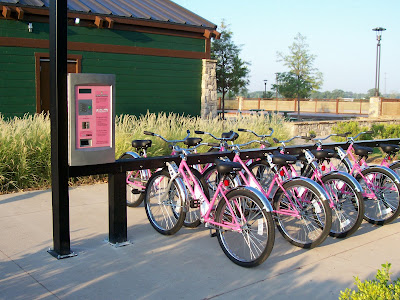 Tulsa Townies is a recreational community bicycle program which promotes healthier lifestyles and began in Tulsa, Oklahoma, USA in August 2007. It was the first application in North America of a solar-powered, automated, network of stations which allowed pick up and drop off of bikes at any of four locations along the Tulsa River. This program was the seed of 3rd generation bike-sharing in North America that grew first into the Humana Freewheelin' program and then matured into the B-cycle bike-sharing services and spawned Decobike as well.

Last week Tulsa Townies, which is sponsored by the Saint Francis Health System and funded by the William K. Warren Medical Research Center, underwent a complete makeover with 50 new bikes and three new advanced electronics stations, designed by Sandvault, that have video surveillance to watch over them. (But what are they looking for?)

Also last week, Oklahoma City, Oklahoma, USA, announced it was planning to join the growing list of American cities offering its citizens bike-sharing as public transportation. At the same time, as highlighted in The Bike Sharing Blog, a study in The British Medical Journal reported that bike-sharing saves lives. Maybe these events can all spur the Townies into fulfilling its healthier lifestyle ideal to more of Tulsa by moving from just being a recreational program into bike-sharing as transportation. For now, enjoy a ride along the Tulsa River Parks with the Townies. It's free with only a $10 refundable deposit! 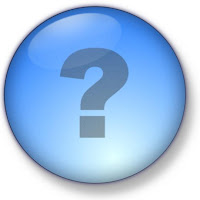 The Bike-sharing Blog is interested in better understanding our audience and what we can do to make the Blog even better for you. We have a short survey that will take two minutes to answer and we would appreciate your response. 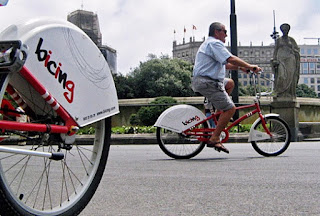 Today's post has little to do with bike-sharing, but it's a funny video coming from Vilnius, Lithuania showing Mayor Arturas Zuokas taking care of business and removing cars which are illegally parked in a bike lane with his own personal style -- using a tank. Whether real or a While set-up, Vilnius has no bike-sharing service yet, but with the political will of such a mayor to improve conditions for cyclists, I wouldn't give it long until they see a bike-sharing service of their own.

A lot has been going on in the Bike-sharing World over the past few weeks. Let's get started.

Paris: Vélib' celebrated its 4e anniversaire last month by now averaging 75,000 daily trips on the ubiquitous grey bikes. After a period of flat growth, the first quarter of this year has seen the greatest increase of usage yet, and 20,000 new subscribers according to France3.

London: For Boris Bike's first birthday a few days ago, Mayor Boris Johnson confirmed that Barclays is extending its sponsorship of the system with another £25 million ($41 million USD) to expand the popular program into the western Boroughs of Hammersmith and Fulham in 2013. This is in addition to the current eastern expansion for next summer's Olympics. Barclays Cycle Hire, with only one forth the number of bikes as Paris, realizes around 25,000 trips daily, around 1/3 of the 75,000 in Paris. That is definitely something to bank on!

Newcastle on Tyne, UK: A new mobile phone bike-share scheme, Scratchbike, has begun with 150 bikes tethered to 15 racks in the central Newcastle. The program is sponsored by NE1, the Newcastle Business Improvement Company. It is scheduled to be a city-wide service, which incidentally began as a student-run program at Newcastle University.

Dublin, Ireland: Dublinbikes two weeks ago reached an all time high of 6,280 rentals in one day! That's around 12 trips per bike per day! Dublinbikes is at the top of the list of the most successful bike-sharing systems in the world. This summer it has added 4 new stations and is adding another 100 bikes to bring its fleet up to 550.

Two new bike rental schemes make riding the Inter-City Rails easier:
Belgium- Blue-bike recently set up 35 locations with around 1,000 bikes at train stations in cities and towns throughout the northern part of Belgium. It's mostly a pick up and return to same location system. It is similar to the original concept of the Deutsche Bahn Call-a-Bike system at rail stations.  As Call-a-Bike has matured, it has become a multiple fixed locations bike-sharing system in many German cities. One may pick up a bike at one location and return it to another. The service is similar to The Netherlands' OV-fiets service.The Bike-sharing Blog hopes the same for Blue-bike as it matures. An online sign up for a membership card is needed to rent these bikes. The card costs €31 ($45 USD) and the daily rate of €3.50 ($5 USD). Also in Belgium, a bike-sharing system with 240 bikes is coming to the city of Namurs.

United Kingdom: Brompton Docks is a "left luggage lockers" folding bike rental system piloted this summer at a suburban London train station. These Brompton folding bikes must be replaced in the same set of lockers from which they were removed. Renting cost starts at £4 ($6.50 USD) for one day to £1.60 ($2.60 USD) for 23 days or more. As with the Belgium system, a membership and a smart card are needed.

And don't miss the OBIS handbook:
The Optimizing Bike Sharing in European Cities (OBIS) handbook has three years worth of data from studying bike-sharing in 10 European counties to identify the best practices, success factors, limits and market potentials, and the optimized strategies. This guide has published in it the authors' key findings and recommendations as a comprehensive manual in the form of a handbook. Read The Bike-sharing Blog's March posting about the OBIS Project and Final Conference.

The ax falls on bike-sharing in Aix-en-Provence, France. After almost four years V'Hello said its last adieu in May to the citizens of this southern French city. With only 143 users, the municipal government felt it was financially better to cancel its contract for the 200-bike, 16-station service with JCDecaux rather than to keep it. According to LePoint, even with low usage, the outdoor advertising company wanted to charge Aix-en-Provence over €400 ($575 USD) more per bike per year than it charges Paris to maintain the system.

Batumi, Georgia: This resort town on the Black Sea now has a 120-bike and 10-station bike-sharing program as BatumVelo began three weeks ago. The program uses the Smoove technology. Whether one subscribes or is a casual user, there is no free usage time. For every 15 minutes of use the subscriber pays 0.50GEL ($0.30 USD) or the casual user pays 0.75GEL ($0.45 USD) whether going to the beach or pedaling around town.

Long Beach, New York: The South Beach Miami DecoBike has landed a 400 bike and 40 station contract making a beach head in New York State. Long Beach, New York, which is just next to New York City on Long Island, is scheduled to have its fully operational bike-sharing program in September. Getting to the sands of the Atlantic Ocean from the Long Island Railroad Station will be a breeze on a DecoBike Long Beach.

While talking about New York, for the last two years at Summer Streets in New York City, there have been bike-sharing demonstrations as part of the activities. Will there be a bike-sharing contract announcement this year?

The Bike-sharing Blog expects Chattanooga, Tennessee also to begin a bike sharing program soon. According to Outdoor Chattanooga, there will be 30 bike stations located around the central business district, the UTC campus and the North Shore. The system will use the same style bike as the Washington, DC/Arlington, Boston, and Minneapolis programs.

Hangzhou, China: According to the HHN Information Center, the Hangzhou Public Transport Company says that, as of now, there are usually around 200,000 daily usages of the system. Generally, each bike is used around 5 times a day.The the highest single day usage was 320,000 rides. There are currently 2,416 service points for 60,600 bicycles.