The Bike-sharing World -The last week of July 2012 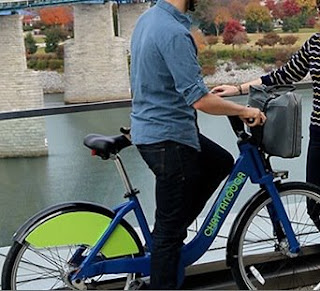 After almost a 3-month delay from its April 25, 2012 start date, Chattanooga Bicycle Transit System began rolling on the evening of July 23rd. The green and blue bicycles are finally available at the docking stations for subscribers and occasional users after a frustrating period of software glitches. Subscribers who signed up for the original start date got access keys today. The special $60 annual subscription rate is once again available for sale. This discount is now extended through September 3. The regular subscriptions will be $75 for the year and $6 for a day pass. These are the only options. The first 60 minutes of each trip is at no extra charge and each additional 30 minutes is $5.


Bike Chattanooga with its 300 bikes now available in 28 stations becomes the first large scale bike-sharing system in the Southeast* edging out Charlotte, North Carolina which launched Charlotte B-cycle last week, but did not outfit the stations with bikes and will not until July 31st.


The difficulties which Chattanooga had with getting its system up and running, not only effected ridership in Chattanooga. It also affected the timing of the similar system for New York City. Last week, New York announced that there would be a delay in the expected July launch of Citi Bike. Now that the situations that caused the delays, both hardware and software, are under control, will New York be able to launch its multi-thousand bike system in time for its annual ciclovia, Summer Streets?


*Miami Beach with Decobike is not considered part of the Southeast. 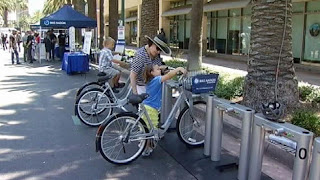 Bike Nation launched its pilot program for Anaheim on Saturday July 23, 2012. This is the first city-wide system on the West Coast of the United States. It will have 10 stations with 100 bikes to be deployed in the coming weeks. The price structure to use the system is multi-tiered: the single day pass is $6, 3-day pass is $12, the week pass is $25, the month pass is $35 and a year subscription is $75. There is a steep escalating fee for each additional 30 minutes after the initial 30 minutes usage period which is free. The success of this pilot program could be the beginning of a 4,000-bicycle Bike Nation system for Los Angeles, California. 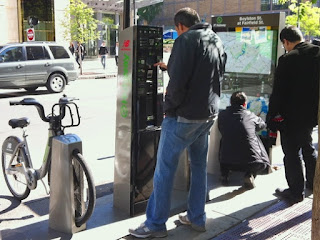 This week brings the second anniversary of The Hubway. Boston celebrated the occasion with a party to which all Hubway users were invited.  It is also offering a special $15 discount on an annual membership. The 600-bike seasonal system plans to expand to 1,000 bikes by the end of this year with stations in Cambridge, Brookline, Charlestown, Dorchester, and Somerville, Massachusetts.

Fort Worth throws its Ten Gallon Hat into the bike-share ring with a $1,000,000 US Federal Transit Administration grant to the Fort Worth Transit Authority to build 30 stations with 300 bikes for April 2013.

According to the NBC News affiliate in Fort Worth, since the "T" or Transit Authority is the recipient of the award, the bike stations are planned for inter-modality with the bus system so the bikes are an extension of the present bus system. With Austin, Texas planning a system and San Antonio and Houston B-cycle systems operating, this Forth Worth system could give Texas bragging rights to the State with the most bike-sharing systems in one state in the USA!

EUROPE
Poland
Warsaw
The end of this month will see a city-wide bike-share system throughout Warsaw, Poland. VETURILO - Warszawski Rower Publiczny (Warsaw Public Bikes) will begin on August 1, 2012. The system, part of nextbike Poland, will have 1,000 bikes in 55 stations. Many of the stations are just about ready for use. It will be almost contiguous with the nextbike system already in operation in the capital's suburb of Bemowo. Expansion plans are to have 2,400 bikes in 2013.

The Bike-sharing World -The Second Week of July 2012

The Fifth Anniversary of Vélib':

On July 15, 2007, bike-sharing went from a little known progressive initiative in a few cities into a World Transportation Phenomenon with the introduction of Vélib'. Vélib' arrived with 11,000 bikes in 750 stations in Paris. Though Paris was not the first̶̶̶—and is now not the biggest—bike-share city, it sparked the revolution that has brought these systems to over 450* cities around the world. Within five years, Vélib' riders have accumulated 130 million trips—with average 110,000 trips every day. The system quickly expanded to 18,500 bikes in 1,700 stations to cover all of Paris and the first ring of its suburbs within 1.5 km. Now there are 224,000 annual subscribers to the system and millions and millions of day passes are sold yearly. Vélib' was modeled after vélo'v in Lyon, France. Subsequently, the Chinese mega systems, the North American bIXI and B-cycle systems and the big European systems were all modeled after Vélib'. World bike-sharing success owes a lot to the success of Vélib'.
Bon Anniversaire! 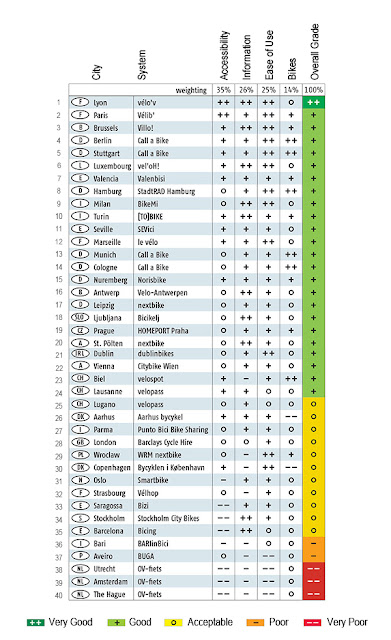 Testing of the systems was performed in May 2012 as part of the ADAC program for advising travelers. Each system was evaluated on Accessibility (35% of the evaluation), Directions (26%), Ease of use (25%) and Quality of the bikes (14%). Each of these categories had the following choices: Very Good, Good, Acceptable, Poor and Very Poor. Paris' Vélib' came in second overall. 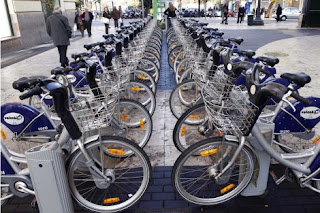 Valenbisi on Monday afternoon July 16, 2012 starts offering supplemental insurance to its bike-share riders. This is in addition to the regular insurance that Valenbisi carries for every rental.  For an additional €9 ($11 US) subscribers can purchase liability and accident insurance. This will cover the insured for any third party bicycling incidents within the city limits of Valencia. The policy pays claims that are brought against Valenbisi and/or against the user by a third party or parties involved in the incident. The claim maximums are: personal injury caused to third parties: €300,000 ($367,200 US) per claim, property damage caused to third parties: €50,000 ($61,200 US) per claim. In addition, there is compensation in the event of accidental death: up to €30,000 ($36,700 US), and compensation for permanent disability by an accident: up to €60,000 ($73,450 US.) This could be a very good precedent for all bike-sharing systems. It is possibly a best practice to emulate. 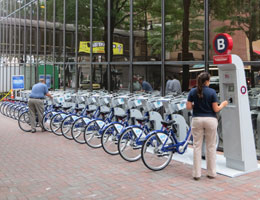 Bike-sharing in the United States got a kick start with the Humana Freewhelin' first generation systems at the 2008 National Presidential Conventions in Denver, Colorado and Minneapolis, Minnesota. As a result, Nice Ride Minnesota and Denver B-cycle are flourishing.
Now, in a run up to its September 2012 Democratic National Convention, Charlotte, North Carolina launched a third generation B-cycle system on July 12, 2012. Charlotte B-cycle will have 200 bikes across 20 stations available in the Center City area within a few weeks. The system—offering only 2 pass types—is a bit pricey with a day pass at $8 and an annual subscription at $65. After the initial no charge 30 minutes, each additional 1/2 hour is $4.

As with the the earlier 2008 Political Conventions, the Charlotte system is being mostly paid for by the health industry. Although created by the Charlotte Center City Partnership, Blue Cross Blue Shield North Carolina is the lead sponsor of the system with Carolinas HealthCare System and Verizon sponsoring a smaller portion.


The Charlotte media is calling Charlotte B-cycle the first major bike-sharing system in North Carolina and the largest in the Southeast. That title of the largest should have been applied to The Chattanooga Bike Transit System, in Tennessee. Unfortunately, that system, originally scheduled to begin on April 25, 2012, still isn't open for public use. 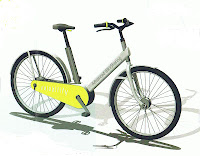 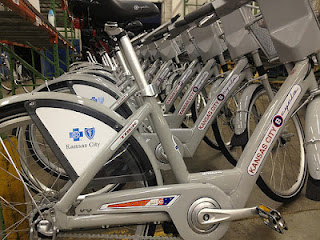 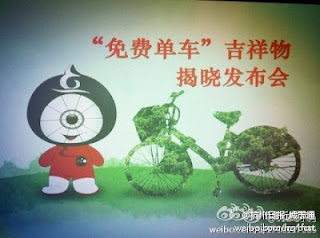