Fast Deployment in the Bike-sharing World this Week! 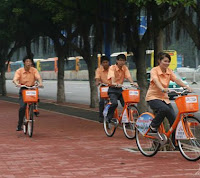 Asia:
In the burgeoning world of Chinese public bicycles, Guangzhou (Canton) which only last month was just talking to consultants, ITDP & Alta Bicycle Share, about starting bike-sharing, began its service today. Eighteen of 50 stations along Guangzhou's Bus Rapid Transit Line opened this morning. The service starting with 4,800 bikes will have 10,000 bikes by the end October. There is no charge for the initial hour and one yuan (15¢ US) for the next hour, as reported by Guangzhou News. 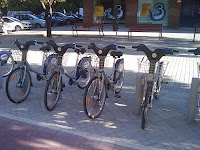 Europe:
This week stations of Valenbisi began to open up, The Bike-sharing Blog reported on April 15, 2010 that JCDecaux had just signed an agreement with Valencia, Spain for 275 stations and 2,750 bikes. In two months, the system was up and running. The yearly subscription is a reasonable €18 ($22 US) and the first 1/2 hour of usage is at no charge.
These two cities demonstrate how quickly, once a government embraces bike-sharing, services can be put into place.
Elsewhere in the bike-sharing world, Savona, Italy opens its branch of Bicincittà on Saturday.

It is a small system of 7 stations and 70 bikes for this city near Genoa. Here, the first hour of usage is at no charge.
North America:
B-cycle has gotten the approval from the San Antonio, Texas City Council to operate a system with its "Texas maintenance partner" -- Bike World. This will be done through the nonprofit Bike Share San Antonio; a bike-share, rental, and tour service with 14 stations and 140 bikes. The stations and bike will be similar to Denver B-cycle. According to the San Antonio Business Journal, watch for an opening at the beginning of next year.

Even more B-cycle news: Chicago will have a B-cycle demonstration system with six stations and 100 bikes this summer and into the fall, according to Chicago Now. For $35 for a month, $45 for two months, and $55 for three months residents, commuters and visitors in Chicagoland can taste real bike-sharing.

By far the most sexy bike-sharing is coming to Miami Beach this summer with DecoBike. You don't have to take our word for it, just watch the video below: 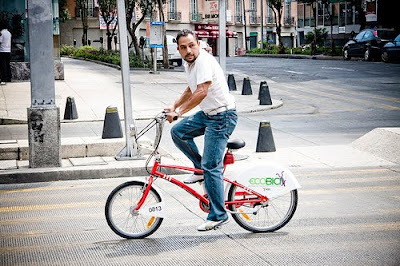 According to Copenhagenize.com, Mexico City repealed its bike helmet law in February 2010 to make way for Ecobici. Copenhagenize reports, "The Institute for Transportation and Development Policy [ITDP] were instrumental in getting the law repealed but there was also support from within the city government."

With Melbourne's bike-sharing service being the only service in a jurisdiction that requires wearing of a helmet, will Melbourne and Australia follow Mexico City's lead? 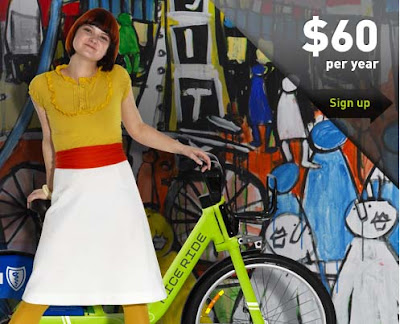 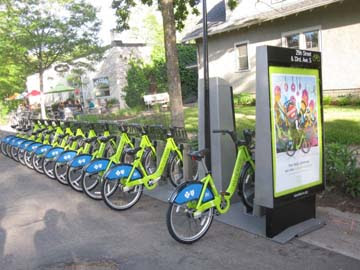 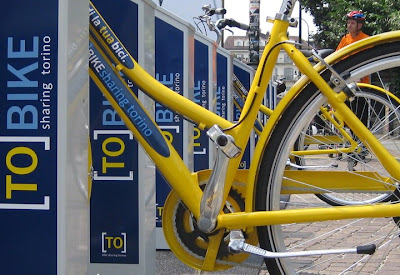 The second largest bike-sharing program in Italy started today. [TO]Bike of Turin began opening the stations to its 1,200-bicycle and 116 station service. It will be completed and fully operational by the end of the summer. [TO]Bike will be second in size to Milan's very successful and expanding 1,400-bicycle BikeMi system. [TO]Bike is part of the Bicincittà, which has bike-sharing programs throughout Italy and Switzerland. In Turin, the annual subscription to the system is very reasonable at €20 ($24 USD). There is a weekly pass at €5 ($6 USD) and a daily at €2 ($2.40 USD). As with most bike-sharing systems, the first 1/2 hour of usage is at no charge and then each 1/2 hour thereafter escalates in price.

An interesting requirement to use the system is a prepay on your subscription of a minimum of €5 to cover possible overage charges, and a minimum of €3 ($3.55 USD) for the weekly and daily passes for the same. Turin is hoping to best Milan's first year usage statistics of more than 3 usages per bike per day and 35,000 annual, weekly, and daily subscribers (Cymichipnews.) 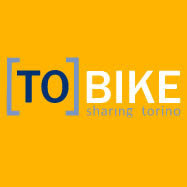 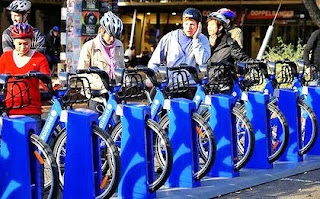