This year has been another fantastic year for bike-sharing around the world. In my most unscientific calculation I have counted there to be about 238 bike-sharing services around the world, up from about 160 last year, for a 49% increase. On top of this, there are another 53 services that are in planning stages and may come online soon. 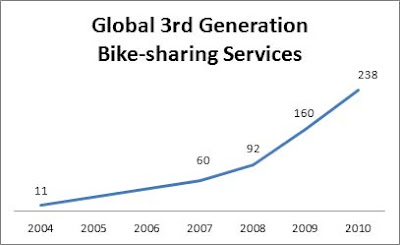 Many notable things happened this year in the field that have pushed the boundaries of bike-sharing and transit. And it’s great timing too as global climate change doesn’t seem to want to let the world catch up. These improvements include:

Vcub(e) (Bordeaux, France) pushed the edges of 3rd generation bike-sharing by integrating with the region’s other transit systems such that the same RFID card could be used on any transit system.

Mexico City repealed its bike helmet law before the launch of Ecobici, however, Melbourne did not, which has limited the public’s uptake. Although, Melbourne Bike Share is experimenting with helmet vending machines and helmet sales at convenience stores for which we wish them good luck.

India and Iran got into the bike-sharing game with Bike House and FreMo, respectively, operating modified 2nd generation services. Good for them. This proves there’s no one right answer for each challenge.

Dublinbikes (Dublin, Ireland) is a little service that became so widely used with a whopping 10 trips per bike per day and 100 members per bike. “By comparison Paris has around 8 per bike and Washington, DC around 5 subscribers per bike.” 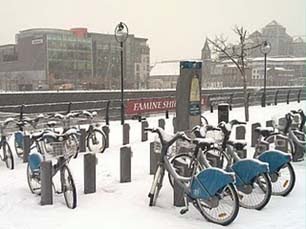 Barclays Cycle Hire (London, England) launched earlier this year with great fanfare as Barclays provided £25 million to sponsor the service, lending its name and covering the city with 6,000 blue bikes. Their safety and usage videos are to date the best I’ve seen yet. Maybe their next video will have Prince William and Kate narrating.

The first large-scale bike-sharing services in the U.S. with the launches of Nice Ride Minnesota (Minneapolis, Minnesota, USA), Denver B-cycle (Denver, Colorado, USA), and Capital Bikeshare (Washington, D.C. and Arlington, Virginia, USA). Each trying to out-do the other, the each launched a couple of months from each other with more bikes and stations. 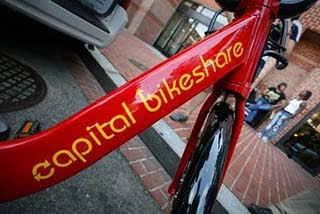 We at MetroBike, LLC have had a good year ourselves with the work we’ve accomplished and the many projects were working on. The movement to get people riding is just beginning to roll. There’s still so much to do to change the path the world has been heading down. Bike-sharing, along with many other innovative, green ideas, will be the change the world must see to improve ourselves.

The Bike-sharing Blog co-authors, Russell Meddin of Bike Share Philadelphia and I, wish you a happy and healthy 2011 with lots of bike-sharing. We look forward to the upcoming year and all the exciting things we have yet to learn, experience, and share on The Bike-sharing Blog. We’ll keep you posted, so you keep us posted too about what’s going on in your part of the world. 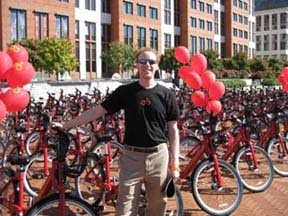 Taking a brief break to get some exercise before his long flight to deliver gifts, Santa, or make that Santas, borrow "Boris Bikes" in London for some jovial riding around town.

Warning: As this video depicts more than one Santa, it should not be viewed by children younger than 12.

Posted by Paul DeMaio at 7:58 AM No comments: Labels: Barclays Cycle Hire 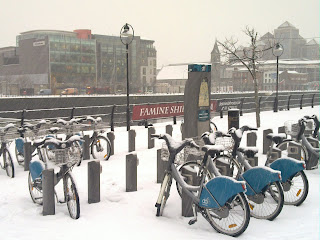 The City Council of Dublin, Ireland yesterday approved a tenfold expansion of the Dublin bike-sharing program from 500 to 5,000 bikes, according to the Irishtimes. The wildly successful Dublinbikes is one of the most popular bike-sharing systems in Europe. Many of the current 450 bikes are being used around 10 times a day.
The approval foresees the expansion over five years. The number of bike stations will grow from today's 40 to nearly 300. The JCDecaux system in operation since September 2009, has signed up more than 47,000 subscribers. That is over 100 subscribers per bike. By comparison Paris has around 8 per bike and Washington, DC around 5 subscribers per bike. For many of those Dublinbikers, even with the snow, 5 years can't come soon enough! 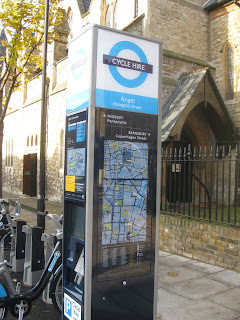 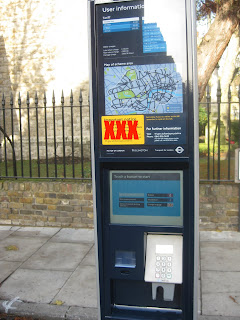