Sometimes it is the little stories about bike-sharing that really demonstrates how transformational and important it is in peoples lives.  Since New York City began Citi Bike at the end of May and Chicago's roll out Divvy today, there has been one bike-share program starting almost every two days throughout the world. The one that caught my attention, happened yesterday in Clermont-Ferrand, a small city of 150,000 people near the center of France.


The very first person to become a member of the city's new bike-share program, C.vélo, was an unassuming woman named Patricia. Since she moved to Clermont-Ferrand, she has waited patiently hoping for bike-share to begin there. She knew it would make her life easier. How did she know? She was the very first subscriber to Vélib' in 2007 according to the Vélib' customer service center in Paris!

Take heart all of you around the world. If you are patient and wish hard enough bike-sharing will make it to your city or town!

The Bike-sharing World Map
This is the #1 resource for bike-sharing systems world wide. It shows new systems coming online which might not be covered in The Bike-sharing Blog. With constant updates, it is  the best way to keep up with the ever changing bike-sharing world. 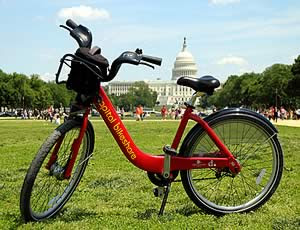 On June 6th in the U.S. House of Representatives a bill was introduced which would add bike-sharing as an acceptable tax-free bicycle commuting expense. If voted into law, the Commuter Parity Act of 2013 would allow employers to provide to their employees up to $35/month for "qualified bicycle commuting reimbursement" which means "any employer reimbursement for reasonable expenses incurred by the employee for the purchase of a bicycle and bicycle improvements, repair, and storage, or bikesharing program, if such bicycle is regularly used for travel between the employee’s residence and place of employment." The bill also makes private bike needs pre-tax for the same amount and brings transit up to $220, which is the same amount that a single occupant vehicle gets. (Note: To those from outside the U.S. who don't understand why a solo driver would get a pre-tax benefit for driving to work, and one that is greater than for taking transit to work, welcome to a quick lesson on how our Congress sometimes malfunctions.)

Over the past couple of years I've called the Internal Revenue Service (IRS) multiple times about whether laws, such as the Bicycle Commuter Act and Commuter Choice Act, accommodate bike-sharing. The first time I was told "Yes, they do apply". A second call to confirm my disbelief brought, "No, they don't." A third call simply confirmed the IRS was as confused as I. They told me that I'd need to write a formal letter to the IRS requesting a determination for a special employer and a specific bike-sharing service, and pay a large fee for their research. Their response would only apply to my specific question and not to the hundreds of thousands of other employers who could possibly benefit from the same answer. Crazy, ain't it?

This bill makes so much more sense and it does need to be written into law with the word "bike-sharing" specifically called out so as there won't be any confusion... other than the fact that the term isn't listed yet in any dictionary that I've seen. As long as Congress is using The Bike-sharing Blog's definition on the top right corner of the website, we'll be set!

When it comes to trash talking about New York's Citi Bike, this is a glitch in the system that even the Wall Street Journal Editorial Board's Dorothy Rabinowiz didn't throw out in her opinionated tirade!

The Bike-sharing World Map is the #1 resource for bike-sharing systems world wide. It shows new systems coming online which might not be covered in The Bike-sharing Blog. With constant updates, it is one of the best ways to keep up with the ever changing bike-sharing world.

CitiBike on The Daily Show with Jon Stewart

The American satirist Jon Stewart recently did a piece on New York City's CitiBike on The Daily Show. This tongue-in-check segment pokes fun at the new service, as well as both its supporters and detractors. It's a good watch.