The following article was published by Reuters reporter Alexandra Steigrad on June 13:

PARIS (Reuters) - It's summer in Paris and the French capital is preparing to offer bikes for anyone who wants to take a ride.

By July 15, the city plans to park 10,648 bicycles at 750 stations and nearly double that by 2008, with riders able to take bikes from one station and drop them off at another.

Work on "Velib"' (short for 'free bike' in French) is just starting, but it is already sparking enormous interest.

Paris's Velib' to Launch on July 15 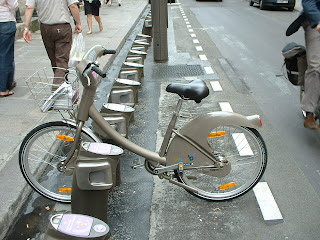 Having just returned from Europe, I had the opportunity to meet with the administrators of various bike-sharing programs, including the Velib' program in Paris. The excitement of the soon-to-launch program was palpable. With a plan to have a fleet of 20,600 bikes on the street by the end of the year, it will surely have a positive effect on increasing bike mode share in this city of few cyclists, reducing traffic congestion, and improving the health of Parisiens.

Velib' is expected to launch on July 15 and the staff are busily installing stations around the city. As of two weeks ago there were 20 stations with two bikes each set up around the city with "spokes"people to explain the system to passersby. With 20,600 additional bikes on the streets of Paris, it will surely increase the bike mode share of the city as bike-sharing has in Lyon with Velo'v (400-500% increase in two years) and in Barcelona with Bicing (100% in three months). These numbers are from the accounts of the administrators of these programs.