London's Mayor: a Cyclised City is a Civilised City

London Mayor Boris Johnson is quoted in the UK's Guardian newspaper as having said: "I have long held the view that a cyclised city is a civilised city, but if we are to get more Londoners on to two wheels rather than four we need to provide the facilities to help them do so."

This is why he has tasked Transport for London (TfL) with releasing a tender to initiate the city's bike-sharing program for a May 2010 launch. According to the TfL site, the City of London and its buroughs want 6,000 bikes at 400 stations with stations every 300m. "It is expected that an initial 6,000 bikes would prompt around 40,000 extra daily cycle trips in central London by 2010," says the Guardian.

While significantly smaller than Paris' Velib' with 20,600 bikes, London's program would be one of world's largest, sharing the recognition with Barcelona's Bicing. London has seen tremendous growth in cycling this decade "with a 91% increase on London's major roads since 2000", says the Guardian. Much of this increase is due to London's tremendously successful congestion charging scheme which requires motorists to pay a fee of £8 ($12 USD) to enter the center city. Due to the cost of the congestion charge, it has shifted many auto trips to transit, biking, and walking, thereby improving congestion and air quality.

"I hope a central-London cycle-hire scheme will inspire Londoners as a whole, and not just the adventurous few, to get on their bikes and give cycling a go. I believe that the work we are carrying out can make the capital a city of cyclists, where to use two wheels is common, not curious," said Mayor Johnson. 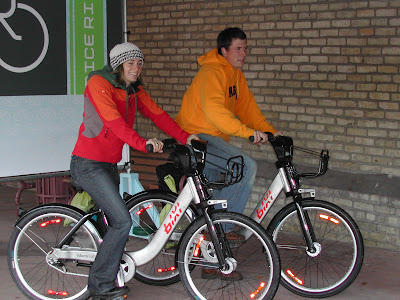 As reported in Downtown Journal, Minneapolis has selected a bike-sharing system vendor and hopes to launch its $3 million program in May 2009 with 1,000 bikes at 75 stations. The City of Lakes Nordic Ski Foundation, a non-profit which will manage the program, selected Public Bike System as the system vendor.

According to Downtown Journal, "The bikes proposed for Minneapolis were designed by Stationnement de Montréal, which is the city of Montreal’s parking authority. The agency is launching a bike sharing [sic] program in Montreal next spring and it beat out six other companies to take the Minneapolis job." Stationnement de Montréal spun off Public Bike System into a non-profit to provide its system to other cities.

For more info about the Minneapolis program, visit Public Bicycle Sharing in the Twin Cities. 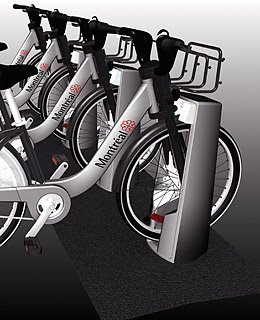 Congratulations, Montreal on this much deserved honor.
Posted by Paul DeMaio at 11:30 AM 3 comments: Labels: Bixi