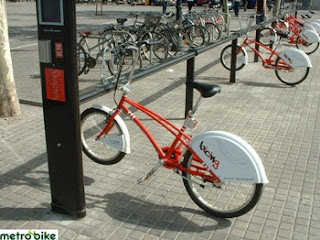 For those in the Washington, D.C. area, I will be giving a talk about the international development of bike-sharing programs and discussing the efforts for bike transit in the U.S. Snacks will be provided at the presentation, which is free, by BikeArlington.

The presentation will be from 6:30 - 7:30pm at the Arlington County Government Center, 2100 Clarendon Blvd., in the lobby's Azalea Room. Space is limited, so RSVP by October 21 if you're interested in attending.

Hot Off the Virtual Presses!

Now that's a lot of calories burned and pollution not emitted! The Newsletter Velo'v states this equates to 5,000 tons of CO2 saved.
Posted by Paul DeMaio at 9:31 AM No comments: Labels: Velo'v 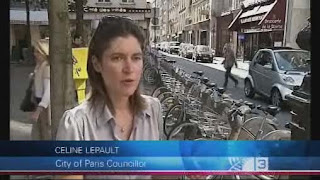 There's a great video about Velib' from New Zealand's TV3 titled "Bikes hoped to lessen Paris traffic woes". The video shows the bikes being used, a close-up of the locking mechanism, and the Paris transportation department's bike-sharing program manager, Celine Lepault, speaks about the program. Parisians are fortunate to have someone like Celine running the municipal aspects of Velib'. Having met with Celine in June, she was excited to practice her English with me in a discussion about the yet-to-be-launch service. Soon, with all of the interviews she has been giving, she'll be speaking English better than me.
Posted by Paul DeMaio at 8:29 AM No comments: Labels: Velib 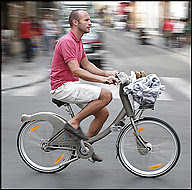 An article in Sunday's Washington Post titled "Free Wheeling: Paris's New Bike System" shows tourists how to use Paris' Velib'. Make sure to bring your smart-chip Amex or Visa with you before you go.

"A major drawback for U.S. visitors is that you can sign up only with a smart-chip Visa card or an American Express card, a limitation that will leave a lot of Americans out in the cold. However, one card can be used to sign up several individuals. JCDecaux, the company running the system, says it hopes this problem will be resolved in the near future."

photo credit: The Washington Post
Posted by Paul DeMaio at 8:00 AM No comments: Labels: Velib 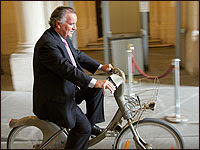 I've been to lots of bike conferences and even one that included a session on bike-sharing, however, this conference in Barcelona is the first I'm aware of that is focused solely on bike-sharing. This two-day event will be on November 29 - 30. If you were looking for an excuse to go to Barcelona, here it is. This Website is in Spanish.
Posted by Paul DeMaio at 5:18 PM No comments: Labels: Barcelona, bicicletas publicas, bike-sharing 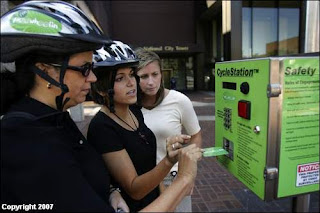