Velib' Accessorizes for the Holidays 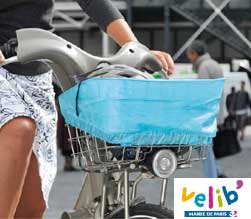 Cyber Monday, the day we pause and give thanks to shopping on the Internet, is here and Velib' is ready to assist you with your gift purchasing needs with a great expansion cycling accessories on its online store. They have a wide variety of goods, including shopping bags of various colors, helmets with a flashing rear light, reflective pant clips, ponchos, locks, and urban chic cycling gloves.

Be the envy of your friends with a tre' cool "Couvre-selle gel avec revêtement imperméable", or "gel seat" in English, which fits over the regular seat for more cushion and to keep your butt dry. Your butt will be glad you did.

Bixi also has a discounted membership for the holiday season. 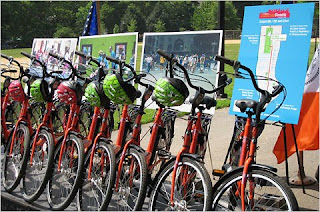 This morning the New York City Department of Transportation issued its long awaited Request for Proposal for a mega bike-sharing system. The request asks for bike-share operators to use the New York Planning Commission feasibility study, Bike-share Opportunities in New York City, as a guide to plan a program. The study suggests that the system start with 10,000 bikes and 600 stations. It should be multi-borough, but begin in the Manhattan Central Business District and expand into other boroughs of the City.

Although the request only calls for a five year initial contract, the system could grow to rival the size of the Hangzhou, China's Public Bicycle Service mega system of 50,000 bikes (see The Bike-sharing Blog July 2009 for more info). If all goes well without any flat tires or broken spokes in negotiations, we could be using one of the great bike-share systems in one of the greatest cities of the world by maybe this time next year.

Nice Ride's survey results were released today and the numbers are impressive. According to Nice Ride, there were 100,817 total trips taken within the first season's five months of operating. These trips were taken by 1,295 1-year members, 89 30-day members, and 29,077 taste-testers, or 24-hr members.

Regarding theft and vandalism, it's clear that Minnesotans and Minneapolis' visitors are honest and good riders and drivers. There were only two bikes lost and three incidents of vandalism causing damage greater than $100. Take THAT, Paris with its horrendous theft and vandalism record! (I'm only kidding, j'aime Paris.) Also, there were no reports of injury and only one reported crash.

The survey (found here) covers 1-year and 30-day members and was sent out to about 1,300 addresses of which about 680 responded. There's tons of good data in there, however, what drew my interest was the following question:

Nearly 20% would have driven. That's outstanding and is quite higher than other cities' mode shift percentages from bike-sharing, which includes Lyon, France with only about 4% shifting away from driving, according to the NICHES publication on bike-sharing. Not too shabby. The survey should be very helpful to jurisdictions around the world who don't have bike-sharing yet get funding for such services as they really do work.
Posted by Paul DeMaio at 5:48 PM 1 comment: Labels: bike-sharing, Nice Ride Minnesota, survey 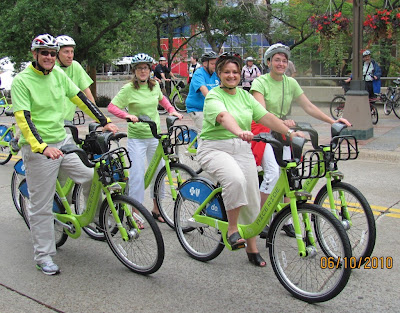