Happy New Year to Bike-sharing Blog readers. As Russell and I look back five years ago to when this little Blog started, we're mindful at just how phenomenal bike-sharing has become. A mere 68 bike-share cities had services operational in December 2007. Europe, the birth-continent of this sharing concept (Amsterdam in particular), had 61 cities and Asia had one. In December 2012, we're up to 493 with Europe still leading the pack with 352, followed by Asia at 90, North America with 35, South America with 15, Australia/Oceania with 4, and Africa with 1. This is a huge change over the past half decade.

The world's present economic uncertainty has slowed the spread of bike share programs in Europe for 2012. The economy and unforeseen circumstances delayed deployment of larger programs in North America while many smaller programs made an appearance there in 2012. Asia kept pedaling along with more bike-share. Many new programs came on-line in China with others planned. South America started to accelerate the presence of bike-share on that continent. Australia/Oceania is still suffering from mandatory helmet laws and remains stagnant. Central America and Africa for 2012 just haven’t begun to share yet, but that only means the potential is immense. We hope all continents will see spectacular growth of cities with bike-share for 2013.

At the writing on this post, The Bike-sharing World Map is barreling to its 3,000,000th viewing. We thank all 3,000,000 of you for making it the #1 resource for bike-sharing cities information in, well, the world. It keeps you up-to-date with new programs which come online even before they are covered in The Bike-sharing Blog. It is the best way to keep up with the ever changing bike-sharing world.


We've seen climate change rear its ugly head more than ever this past year. Our region in particular was walloped by a storm so big that the term "Superstorm" was created to better describe it. The image below shows the storm covering the eastern half of North America. The storm was the largest in our region's recorded history. Is this the new normal? We hope not. Drastic policy measures must be taken up with haste around the world to stop the irreversible boil of the planet. Bike-sharing and the creation of complete bike infrastructure in our cities to encourage cycling must be part of these policies. Bike-sharing changes the way people get around in our cities. There is less reliance on burning gasoline and diesel fuels. It can help reduce the particulates in our air and put the brakes on global climate change. Don't disappoint us, world. Let's get cooking - before we're cooked! 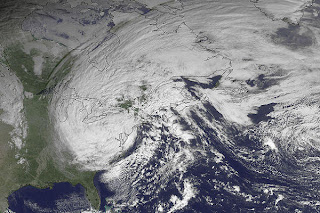 To finish on a more upbeat note, Russell and I wish you a happy and healthy 2013. May all your rides be downhill and all your bike-sharing bikes be pre-adjusted to your height.

There's a lot going on in the bike-sharing world in December. Read on for an update from around the world:

After a few weeks of a trial period, Zhuhai City, Guangdon, China, will officially launch its home-grown bike-share system this week. The 5,000 bikes in 195 station system is named "City Bike". There is a good video, in Chinese of course, of the system. Canopies will shelter 111 of the stations. It is reported that some of the stations will also have free WiFi -- now that's 4th generation in my book! As a twist on the initial 30 minutes usage at no extra charge policy, the system only allows 90 minutes at no extra charge per 24-hour period. The design of the components of the system look very similar to the Public Bicycle System Company's components for Barclays Cycle Hire in London. Maybe it isn't purely occidental! 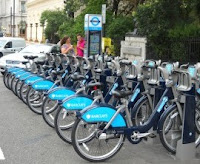 Last week, just ahead of Zhuhai, Anji in the Zhejiang Province of China launched a 1,500-bike/60-station service using the same equipment. Anji Public Bicycle is a good example of small Chinese cities with populations between 500,000 and 1,000,000 adopting the Chinese government's concept of "green travel, low carbon life".
Over the next two years, we can expect to see many more smaller Chinese cities launching good size bike-sharing services.

StadtRad, the very successful DB Rent bike-sharing service in Hamburg, has 1,650 bikes in 123 stations. According to a DB Rent press release, it had two million trips last year. January 2013 will see a new price rate for bikes kept over the initial 30 minutes. An increase from 4 cents to 8 cents for each additional minute over the first 30 minutes will cause pfennig pinchers to get those bikes back in time! There is also a planned expansion of the system for next year. StadtRad, part of the Deutsche Bahn Call a Bike system, is not part of the yearly "Winterpause" where Call a Bike closes from December to March. Also for this winter, bikes will be available in the German cities of Berlin, Stuttgart, Kassel, and Frankfurt. 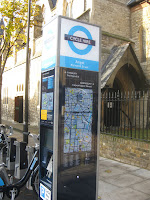 There have been 18,500,000 Boris Bike trips since Barclays Cycle Hire started in July 2010. Starting next month, access fees to use Barclays Cyle Hire will double! Here is the Rate Schedule. Even with this price increase, the new £2 ($3.25 US) daily access fee is less than a one-way trip on either the London buses or Underground. Boris Bikes are still the most economical way to get around Central London. In addition to the planned expansion to the west of London, Sales Agents are reporting that stations are proposed near the very busy Clapham Junction train station in the south of London.

Bristol
Even though the original Bristol bike-share system of 2009, lasted only 18 months, a new system came to town. Nextbike UK a division of Nextbike GmbH had an operating station with bikes at a conference there last week. Here is a video of the nextbike programs in English.


They also currently have a station with bikes just south of London.

It has been a long time coming, but Florence, Italy might soon have bike-sharing. Like in many progressive cities, bike-share advocates have been working for years to get a system there. Recent reports indicate there could be bike-sharing available for the thousands of visitors who come to see the Ufizi and the Ponte Vecchio. A tender for 50 stations with 750 bikes is about to be released. 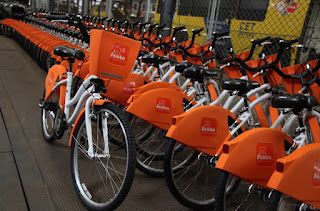 This ocean-front city close to Brazil's largest city, São Paulo, gets bike-sharing. Within the last month, the beaches of Santos, Brazil are filled with 150 Samba bikes in 15 stations. Bike Santos charges a modest registration deposit of 10R$ ($4.80 USD). The bikes are then available for 30 minutes at no charge. Go over 30 minutes and there is a 5R$ ($2.40 USD) charge for each additional 30 minutes. Once the bike is returned, there is a 15-minute waiting period before another bike can be borrowed at no charge.

Yet another bike-sharing system is coming to São Paulo. Ciclosampa will soon have its 200 Banco Bradesco-sponsored red bikes in 20 Banco Bradesco sponsored red stations added to the streets of São Paulo. CicloSampa will be using equipment from the U.S. company Cycloshare. The other systems currently operating in São Paulo are SancaBike, Nossa Bike, and itaú bike sampa. With multiple incompatible systems, it is a very interesting city where bike-share doesn't share! 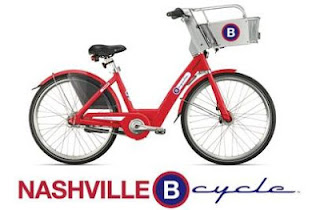 This week, Portland, Oregon's City Council cast its final vote approving a contract with Alta Bicycle Share to launch Portland’s bike share system in 2013. Mayor Sam Adams said, “Bike-share is a game-changer for bicycling in Portland.” Alta Bicycle Share announced it accepts the responsibility of developing, fundraising, launching, and operating Portland's bicycle transit system. The program is to start with 750 bikes in 75 stations. 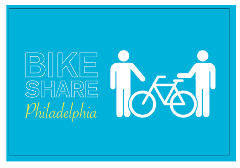 It has been a long ride since the beginning of 2007 when Bike Share Philadelphia began advocating for bike-sharing for Philadelphia. This month, Mayor Michael Nutter finally publicly announced to the Philadelphia Inquirer that he would seek appropriations for a bike-share service. The Inquirer quickly endorsed a program in an Editorial. We all are waiting in anticipation for the process to roll from words to bikes and stations, then into the best program in North America.

The Bike-sharing World Map is the #1 resource for bike-sharing systems. It shows new systems which come online which might not be covered in The Bike-sharing Blog. With almost 3 million page views, it is known as the best way to keep up with the ever changing bike-sharing world.

How the Best Bikeshare in the Country Does Business

The first plan of its kind for bikesharing in the United States has just been published. It is a comprehensive 6-year plan for Capital Bikeshare in Arlington County, Virginia.
Arlington County Capital Bikeshare Transit Development Plan 2013 to 2018
It took more than a year to finalize the report because we wanted extensive public input at all stages. This included open forums with regional partners, the business community, all Arlington civic associations, and the general public. Opportunities for public input were plentiful, both online and at in-person forums. The Capital Bikeshare crowdsourcing map was also used.

Listening to the public provided:
The Transit Development Plan represents a major step towards establishing bikesharing as a legitimate transit mode. The plan will be submitted to the State of Virginia in the same way a local bus service would be submitted. The hope is that bikesharing will be considered for funding through the same channels. Capital Bikeshare is an integrated part of the transportation fabric in the Washington D.C. region, and it should be treated as such.
The plan spells out how people are using Capital Bikeshare in Arlington and the region and also how people will use it over the next six years. Trip quantity, trip type, motivations to ride, expansion plans, revenue, funding needs, life cycle and replacement costs are all outlined.
A must-read for anyone working on bringing bikesharing to their city or municipality – or anyone with local interest in the Capital Bikeshare program – we are excited to have this resource and to all the great years of bikesharing ahead.
Chris Eatough is BikeArlington's program manager.
Cross-posted on The BikeArlington Blog
Posted by Paul DeMaio at 4:59 PM No comments: Labels: bike-share, Bike-share Blog, bike-sharing, bikeshare, Capital Bikeshare, Washington D.C.