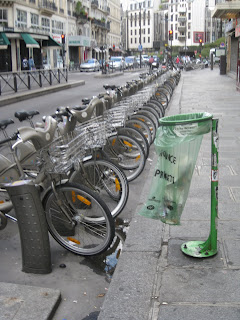 With in the next week, both Montréal' s bIXI and Minneapolis' Nice Ride will be back on the streets after hibernating for the winter. Nice Ride plans on starting its second season on April 11 with eight new stations in north Minneapolis and plans to have 100 stations this summer to include service in downtown St. Paul. They are offering a great way to shake off the cold Minnesota snow with a special limited time $40 annual subscription sale that is $20 off the regular price . bIXI will open its 400 stations in Montréal on April 15. The last few weeks have seen the stations back in places all over their service area. Five new stations are planned for an expansion of the system into Westmount this season. Les Montréaleurs are ready to roll. Capital Bikeshare, however, has beaten winter by rolling throughout the cold months creating scores of winter weather warriors.
images: Bike-sharing Blog, Nice Ride, and bIXIRussell Meddin bikesharephiladelphia.org
Posted by Russell Meddin at 5:09 AM Labels: bike-sharing, Bixi, Minneapolis, Montréal, Nice Ride, Nice Ride Minnesota, Paris, Velib, Vélib'

FYI, Montreal's Bixi has also upped the free period from 30 min to 45 minutes for all monthly & yearly subscribers. Daily & weekly users are still limited to 30 minutes for free. Fare have not been changed, and Bixi is also adding many new stations and bikes this year.