DecoBike a concession to the Art Deco of Miami Beach

Today in Miami Beach, Florida, an experiment in bike-sharing begins. DecoBike starts its operation in what is considered the crossroads of North and South America. A city of almost 90,000 people will have 1,000 DecoBikes in 100 DecoStations making it the service with the best ratio of bikes to population in the Americas. DecoBikes takes its name as a nod to the Art Deco buildings along the beach.

The service is not part of a street furniture contract, nor is it run by a non-profit that oversees operations for the city, nor it is a public-private scheme, nor is it a publicly owned and funded system. It will be one of the few services set up totally as a private venture as it is run as a concession within the city. In fact, as a private venture, the company already has all of the DecoBikes sponsored by KLM-Air France to publicize its upcoming new air service from Miami to the world bicycle capital, Amsterdam! 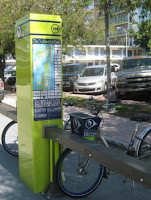 With a concentration of stations, the service is made to work for both residents of Miami Beach and the many tourists that seek its Art Deco hotels and warm beaches. The pricing for using the service differs from most other bike-sharing programs. For residents, the longest term for a membership is monthly at $15. There is no yearly membership. For both residents and tourists, there is a daily access pass for $14, a 3-day access pass for $30 and a special 5-day access pass for $49. All of these passes allow unlimited trips during the term with each trip 30 minutes or less at no charge. Each additional 30 minutes is billed at $4. The stations not only allow sign-ups for access passes, but also allow the borrowing of a DecoBike on an hourly basis. The hourly rate is thirty minutes for $4, sixty minutes for $5 and 120 minutes for $10, in each case, it is a single use. Most of these options are available at the easy-to-use stations.
Now with bike-sharing in sunny Florida, those bike-sharers whose services hibernate for the winter will have a place to enjoy the beach and the bikes.

Interesting! I have further question to understand better this scheme. If the origins is full private, does the city get money because a private company use the public space for economical purposes. In case of full private initiative, does it mean that nobody is in charge of this system in the city? And why do they call it "Official system" if there is no public intervention?

This how the City of Miami Beach described the arrangement in their press release for DecoBike's grand opening/ribbon cutting.

"DecoBike was awarded a five-year, revenue-sharing concession agreement in 2009, as part of a competitive bidding process that began with the issuance of a request for proposal in 2008. DecoBike manages and operates the city’s self-service bicycle rental program.