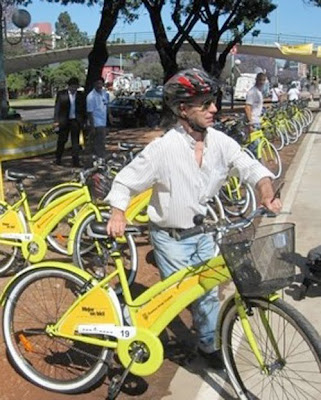 Buenos Aires, Argentina has joined the world of bike-sharing with a staffed 2nd generation system. The city’s bicycle program, "Mejor en Bici", released 100 bikes onto the streets of Buenos Aires this past December 1st. The human-powered pilot program has grown to employ a fleet of 500 ‘bicis’, which users can pick up at any of the 12 hubs after signing up with the attendant, and drop it off at any other hub during the hours of operation.

The hubs are open from 8am – 10pm during the week and 9 – 3 on the weekends. To help support the service, Mejor en Bici and the Institute for Transportation and Development Policy are developing a network of 60 miles of cycle tracks, almost half of which is already complete. The city hopes to eventually expand to a fully automated 5,000-bike program, putting it on par with some of the world’s largest 3rd generation services.

Editor's note: Mexico City also had its own "Mejor en Bici" service with three locations in 2008, which grew into what is now EcoBici.

We love the new bike sharing scheme and the new network of bike paths that the Buenos Aires city government has constructed. As a company focussed on developing our environmental policies it is great to see this initiative.
Vamos Spanish Academy (Buenos Aires)