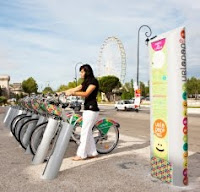 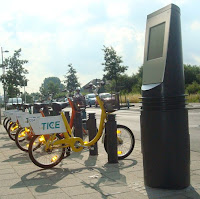 Does anyone know what the situation is here in Australia? There's no existing bike sharing scheme that I can find. I know Brisbane promises one for next year but how are they going to solve the helmet problem?

Here, you have no choice, even adults have to wear helmets or be fined. That includes all bike-share users, locals and tourists, as well. But helmets can't be dispensed from a stand like the bikes They have to fit properly, and they have to be sterile


I became interested in the issue when riding around sunny Sydney recently and finding almost no other bikes. I suspect it's partly because there's no bike-share in our beautiful city, and no bike in turn, share because of our helmet laws.

Here's me and friend, Bruce, making the sad discovery

Biking up the Wrong Tree.

Later, I found out about Sue Abbott who's fighting a fine for not wearing her helmet in the far away country town of Scone.

I hooked up with Sue and have now made two short films about her campaign.

She lost her case and is now going to appeal, she says. if she can raise awareness about our foolish helmet law, (If helmets were so great, all countries would mandate them) we might be able to get it changed, making helmets a personal choice.

Then, we'd be able to join the bike share revolution. So if you want to support bike share in Australia, do take a look at Sue's movies. 1. Sue Fights Against Helmets and 2. No Helmet, Please

You can see them on my new bike blog, And So To Bike

Mike Rubbo. Any info on the Aust. situation, please pass on to us.