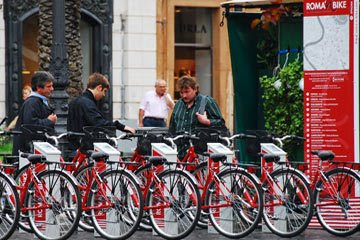 Update as of March 17: Thanks to Blog fan Michele Iurilli, Abitare a Roma reports that due to the public uproar about losing the bike-sharing service, Cemusa changed its mind and is keeping the service running. A meeting was convened by the Office of the Mayor and Cemusa to resolve the matter by the end of March.
Posted by Paul DeMaio at 10:38 AM Labels: bike-sharing, Cemusa, Italy, Roma'n'Bike, Rome

here is a link

thank you for your splendid job

Roma’n’bike entrusted to the company of local transport

At this link the news on Corriere della Sera, one of the major Italian newspapers:
http://translate.google.com/translate?prev=hp&hl=it&js=n&u=http%3A%2F%2Froma.corriere.it%2Froma%2Fnotizie%2Fcronaca%2F09_aprile_16%2Fbike_sharing-1501193077399.shtml&sl=it&tl=en