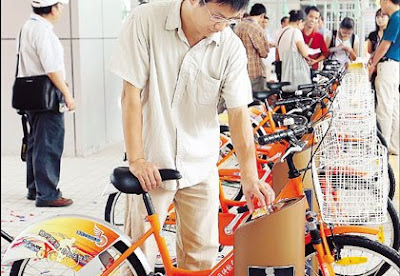 According to AFP, Shanghai began testing a bike-sharing system last Monday. "The programme was launched to coincide with World Car Free Day [..] and is part of the city's preparations to host the 2010 World Expo, whose theme is 'Better City, Better Life,' Shanghai Metro said.

"If successful, the programme will be expanded to 800 stands outside metro station exits and on 2,700 other sites in business and residential areas by 2012, the Shanghai Morning Post reported.

"To use the system, riders must pay a 200 yuan (29 dollars) deposit and are charged one to three yuan an hour on a progressive system designed to encourage short rents and quick turnover. The first half hour is free.

"The bicycles are being supplied by the Shanghai Forever Bicycle Company, one of Shanghai's oldest bicycle brands.

"Shanghai-made Forever, Phoenix and Flying Pigeon brand bicycles used to dominate the city's roads, but as China has become more affluent cars have taken over.

"The city recently banned bicycles from travelling on select major roads to prevent them from slowing down motorists."

The potential for bike-sharing in China is huge. According to People's Daily Online, China "had more than 660 cities by the end of 2002 of which 10 had populations of more than 4 million each in the urban area; 23, between 2 and 4 million; 138, between 1 and 2 million; 279, between 500,000 and 1 million; 171, between 200,000 and 500,000; and 39, less than 200,000." Cities with all these sizes, as well as those smaller than 200,000 residents, are capable of supporting bike-sharing. So with 660 cities plus likely a few more since 2002, governments have a clean slate to implement programs in a country that is known for once having one of, if not THE world's greatest cycle culture. The question which Earth's climate may very well depend on is can China bring back it's former glory as being a leader in bicycle use?

p.s. - It's interesting to note that Shanghai Metro is running the program. A transit agency running a bike transit program, what a concept!
Posted by Paul DeMaio at 8:56 PM Labels: Shanghai

Actually, that's the same concept used in São Paulo, Brazil (although it's smaller - and it's not China).