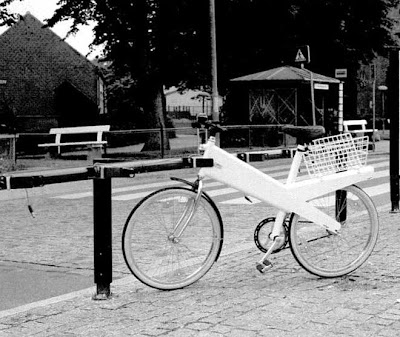 Even before Copenhagen launched its Bycyklen (i.e., "City Bikes") in 1995, Denmark had been experimenting with 2nd generation bike-sharing systems for a few years. The cities of Farso and Grena had 2nd generation programs as early as 1991 with Nakskov launching in August 1993 with a fleet of 26 bicycles and parking at four stations.

The image above taken from "The Bicycle in Denmark" published by the Danish Ministry of Transport in 1993 shows what appears to have a coin-deposit lock which when a coin was inserted, would push out the key, thereby unlocking the bike from the station. This publication mentions the Eurobike company which worked with Nakskov on its bike-sharing program. My guess is Copenhagen's bikes were based on these bikes, but with improvements to make them more utilitarian. Copenhagen's bikes were developed by a different designer - Cycle Importers of Scandanavia (CIOS).

In other Copenhagen news, as the 2nd generation coin-deposit lock is prone to theft, Copenhagen is considering 3rd generation models to implement in the future.

Hello there - i am so happy i have come across this blog. :) I am a big fan of cycling too. :) (One of my most inspiring things is this article: http://www.odyssei.com/travel-article/3556.html ) I swear I will do it one day too!!! I hope you are having a nice wednesday! See ya in the blogosphere!

Nice Post. Thanks for sharing this information with us.

It is extremely interesting for me to read that article. Thanks for it. I like such themes and anything connected to them. I would like to read a bit more on that blog soon.