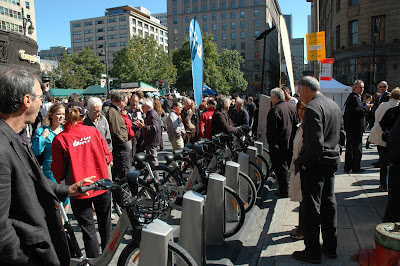 On Sunday, September 21, Montreal's mayor Gérald Tremblay kicked off their city's newest transit service - Bixi - with 40 bikes at four stations for a 6-week free fall demonstration period before a grand launch next April 15 with 2,400 bikes. The program's name (sounds like "Dixie" with a B instead of a D), a combination of bicycle and taxi, was created by an individual in a public contest and voted on by the program's future customers.

"High-tech and vandalism-resistant, Montreal's bikes feature comfy seats, three speeds and raised handlebars, and will be stationed at solar-powered docking stations that can be moved according to demand. The first half-hour will be free, the next half hour $1.50, and successive half-hours get pricier; the objective is to use the bikes for short hauls," reports Canada's Globe and Mail.

Additionally, "The parking authority invested $15-million into Bixi, but says it expects to break even; 80 per cent of costs are expected to be defrayed through memberships, which would cost $78 a year or $28 a month." A 24-hour pass is available for $5.

Having recently visited Stationnement de Montreal (Montreal Parking) last month, I was quite impressed with their system and business model. They are one of the first bike-sharing service providers of which I'm aware that are not advertising-centric, but rather mobility-centric as with their other duties with managing Montreal's parking with the quasi-governmental organization. Other mobility providers like departments of transportation take note on this means of provision. This is a new model which I'm sure will do well. 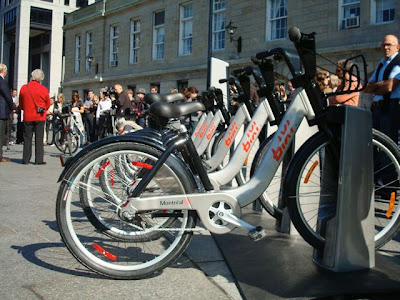 Looks like a really well thought out system. We have invited them to bring their demo to Toronto on October 24.

that's good news. thanks for posting it.

I wish that I could share your optimism about the pricing structure. I am highly skeptical about the number of people who will pay $28/month or 5$/day (in addition to other transportation costs!) for the luxury of an occasional short bike ride. Many Montrealers already own bikes, so presumably they will not be the primary users of this system. Transit riders might be an attractive market as this could facilitate connections between service points, but this fee would be in addition to their current transit fares (perhaps there could be some sort of combined pass?). Car drivers perhaps have the most potential - not that this service is enough to get them out of their cars, but perhaps it could reduce the number of short trips they make by car. It seems like they have made good choices about the areas to focus on initially: relatively dense mixed use neighbourhoods which lack great transit options. Car ownership has been increasing in these areas for some time now.

IMHO, the purpose of bike-sharing is to *supplement* existing transportation options so that fewer people will feel the need to use a car. At these prices, this will most likely be considered as an independent mode option (ie bike -or- transit -or- car -or- taxi), which I don't think is what we are trying to achieve. The calculus should be: I need to get from here to there, and this new service makes it so much easier (without a car).

It's $11 a month if you opt for the "annual" membership. I think you're looking at it with a rather narrow focus; folks who might otherwise (try to) hail a taxi, or huff and puff on the crowded sidewalks downtown (exasperating) are a good target market. While there are many cyclists in Montreal, this system will enable many more to make the change.

the 11$/month price comes from the fact the bixi service will be available from April to November. It's difficult to ride in Montreal more than 7 months a year. Only a few maniacs ride all year long, and I don't think they are the target for the BIXI.

The BIXI stands we made to be removable, so that they can be removed during winter.

I live in a business-oriented quarter of Montreal, and I am pleased to say I have already seen men in suits jumping on these bikes simply because they are convenient. Maybe they will get a taste for cycling, and do it more regularly!

Also, the yearly fee is less if you combine it with public transport monthly passes.

We are setting up a Camilien-Houde Climb with Bixis tomorrow may 21st at 7PM. Meet-up at the corner of Parc and Mont Royal !

BE EXTREMELY CAREFUL!!!!
Many hiden fees! I ended up paying 33.50$ for 3 hrs!!!
The 5$ fee is not for a 24hour pass, its a standard fee you pay for accessing the service! So you always get that charged to your card!

They are also very rude on the phone and refuse to listen or understand the issue!

My experience was the first and the last!

We used the bixi bike service when we were visiting Montreal for a week. It was really convenient instead of leaving the parking garage and paying to get back in and plus it was great exercise! It's $5 for a 24 hour period and as long as your trips from one station to another is less than 30 minutes (which should be easy for most trips) then all usage charges are free. There are additional charges if you extend beyond the 30 minute period. Look at the bixi website for clear information.