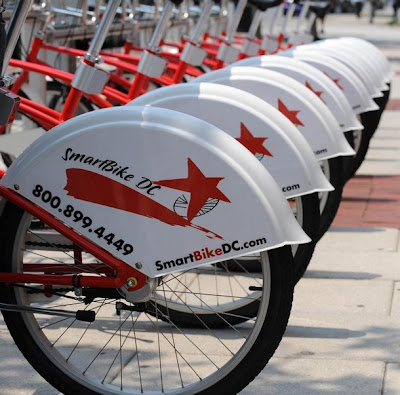 It’s official! North America’s first high-tech bike-sharing program has launched! SmartBike DC opened for business today with 60 of its 120 bikes and 10 stations becoming available to the public. According to The Washington Post, Jim Sebastian, DC’s Bicycle Program Manager has said that the service will only be available to registered customers. The launch should provide the D.C. government and the program’s operator, Clear Channel Outdoor, sufficient time to expand and adjust the program for a larger program next year.

Today marks the beginning of a new era for bicycling in the United States. Due to fuel prices and the resultant affects such as the beginning of a contraction of exurbs (or distant suburbs) and shifts away from single occupant vehicle travel to transit and biking, a colleague has said that the U.S. is beginning to renegotiate the social contract we have with public space.

For a video on the bikes, local TV station NBC4 has this.

Upcoming launches in North America should be as follows:

It's going to be a busy fall, bike-share fans!