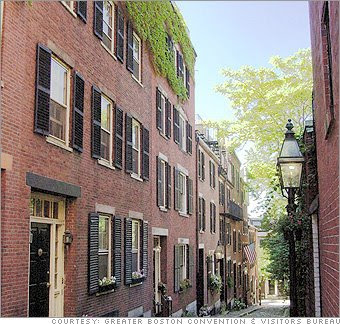 Boston has released a Request for Information to learn more about bike-sharing technologies and models for implementation. They're estimating the first phase of the project to include 450 bikes, 1,000 for the second phase, and "over 1,500" for the third.

Boston's bike-sharing program objectives are to:

"- Launch a successful bike-sharing program on or before May 2010 that is financially
sound, has the ability to expand in subsequent years, and is capable of meeting negotiated performance standards;
- Create an additional green public transit mode that is used by 15-50,000 people a day;
- Create 50 green jobs and promote green business in Boston;
- Increase the mode share of cycling in the city – target an increase in mode share from 0.5% to 2%-5%;
- Facilitate transit for commuters, tourists, and other visitors.
- Ensure that the service is capable of operating independently without long-term public investment; and
- Provide a service that results in high rates of membership satisfaction."

It's great to see Boston interested in bike-sharing. They've recently hired the city's first bicycle coordinator and have a lot to do to make Boston into a truly bike-friendly city. However, with the Request for Information, they are well on their way.

It is great to Boston getting on board with this given its strong local cycling culture. A few objectives in the Request for Information posted seem rather amiss, if not contradictory however.

While Boston does indeed have a diverse and hearty cycling community the city itself still has a long way to go in providing the needed infrastructure to make a bike share system reach the targeted mode share goals. Perhaps it is a chicken and egg scenario, but regardless, you can't have one without the other.

Also, the intent to make such a system self sufficient without longterm public investment seems not only impractical, but unfair. Capital improvement money goes to funding roadway projects and other public subsidies help support rail and bus transit. Why should a bicycling transit system have to subsist on its own? This is why bike share systems tied to outdoor advertising contracts are so attractive, and for all accounts seem to thrive. Paul, do you have any data about the fiscal sustainability of programs not related to advertising?

It is good to set high reaching goals at time, as appears to be the case here, however it sets expectations on potential operators that they may not be able to deliver.

Jeff, a majority of bike-sharing programs around the world do receive government subsidy in one form or another. As with programs provided by advertising companies (i.e., Clear Channel, JCDecaux, and Cemusa), governments provide them with public right-of-way for their advertisements on bus shelters, billboards, and kiosks in exchange for the provision of a bike-sharing program.

Through these contracts governments give-up a percentage of revenues they would have received so that they may be redirected towards the bike-sharing program. Most of the world's bike-sharing programs would not exist without this. Bike-sharing is therefore heavily reliant on public funding.

All other modes of transit receive substantial public funding. While bike-sharing does not require as much funding as other modes, it will certainly continue to require its fair share of public support.

We here in Los Angeles are taking the first steps on implementing an RFI program.
I can only hope we go into the program with our eye open.

All the facts are pending