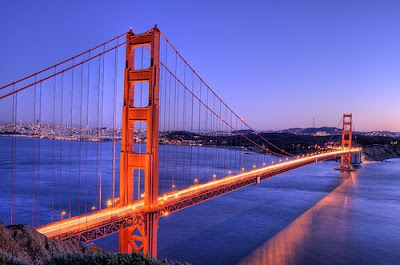 The City of San Francisco is working towards its own bike-sharing program, however, due to a legal challenge preventing any bicycle-related development, San Francisco hasn't been able to make much progress towards bike transit... until now. According to an article in The Examiner, San Francisco Mayor Gavin Newsom "said he’s found a way to start a smaller [bike-sharing] program without violating the court-ordered bike plan injunction: offer an internal network only for the City’s 28,000 or so employees."

" 'The [San Francisco Municipal Transportation Agency] is developing details in the next few months and will implement the program for city employees soon,' said the Agency's director Nathaniel Ford. 'We are in discussions with Clear Channel about the bike-share component,' Ford said. 'When the bike injunction is lifted, we will implement it citywide.' "

The lawsuit stems from the Coalition for Adequate Review which sued San Francisco last year, "claiming that the bicycle plan should be subject to environmental review because it makes physical changes to the City’s streetscape," writes The Examiner. "The group cited the California Environmental Quality Act, which requires public projects to undergo a review if they might alter the environment. In order to come into compliance with CEQA, the City must either conduct an environmental impact review or become exempt from the process."

Thanks to a heads up by WashCycle for this article.
Posted by Paul DeMaio at 10:07 PM Labels: Clear Channel, San Francisco

Bike-sharing would be good here. The less cars the merrier.

Here's a related story about the status of SF bicycling programs and policy in light of a certain lawsuit...