Bike-sharing and Beer: A Good Mix? 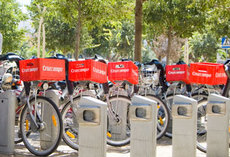 Recently, JCDecaux began selling advertising space on the bikes of its SEVici bike-sharing system in Seville, Spain. It cleverly created a new front basket on the bikes that looks like the carrying case for Cruzcampo Cervesa,  a beer brewed by Heinekin. A local consumer association believes that these new front baskets violate the region's laws concerning the advertising of alcohol in a sports related activity involving minors. The local group is demanding the advertising be removed, as reported in laopiniondemalaga. 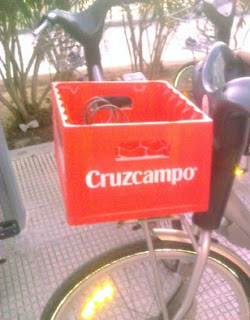 Are these utilitarian vehicles used for sports? According to El Correo de Andalucia, "This service as transport already has 60,000 users per day which means that 6.6% of all journeys are made in the city are by bike." Are there minors using them? According to SEVici, 14 to 18 years-olds are allowed to use the system, but only with written permission from parents or guardians.

Advertising has always been intertwined with 3rd generation bike-sharing. The first systems were paid almost solely by advertising revenue, either off-site or on the bikes. Then different business models distanced the bikes from advertising. Now there is a strong movement for "peddle while one pedals" in bike-sharing. As these systems grow, it is becoming evident that income from advertising is a necessity to pay for the increasing cost to maintain the systems.

The Bike-sharing Blog and the bike-sharing world will be watching how this controversy unfolds. Since we all know that bike-sharing systems are created to serve the public, or in this case should we say "cervesa" the public, whether they are with or without advertising.