Baltimore a Charming City for Bike-sharing 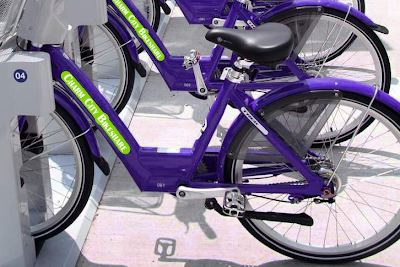 
Baltimore, Maryland is in advanced stages of negotiations with B-cycle to be the one of the next mid-Atlantic cities in the United States to bring bike-sharing to its citizens. With 250 bikes in 30 stations under discussion, the plan is to deploy the system around July 2012 in the Central Business District (CBD) and in the area just to the southeast of it. Because Baltimore is such a gracious city, with a dash of southern hospitality, the bike system will be called Charm City Bikeshare. It will complement the Charm City Circulator a free bus transit system which makes connections in the CBD. Baltimore, around 65 km (40 miles) north of Washington, DC, is close to initiating bike-sharing as well as New York City, NY is soon to announce a system to begin in spring 2012. With the New Balance Hubway spinning smoothly through Boston, MA, bike-sharing is developing in most of the major US cities in northeast corridor. Unfortunately, there will remain a gaping void in the center of this string of bike-sharing cities because one major city does not yet understand the importance of bike-sharing's role in public transportation.

Which US city has the largest bike-sharing program today? On paper it is Capital Bikeshare of Washington, DC and Arlington, VA with 1,100 bikes in 114 stations, but Nice Ride Minnesota has been expanding this summer and surpasses Capital Bikeshare with the actual number of bikes available on the streets during some days. It's like watching a pennant race between two cities. That is a baseball sports contest for our non US readers. Like baseball, that race will end in the late fall when Nice Ride goes into hibernation for the winter!


Update:  November 9, 2011, ABC News, The Baltimore City Board of Estimates approved an exclusive agreement with B-cycle to bring bike-sharing to Baltimore

Jacques (of all Trades) said...

And as DC is in the process of adding about 30 stations this fall in DC and Arlington, with nearly 100 more coming next spring and summer (in DC, Arlington, Alexandria, Rockville, and possibly other parts of Montgomery County), the crown for largest will stay with Capital Bikeshare, at least until the NYC system comes online.