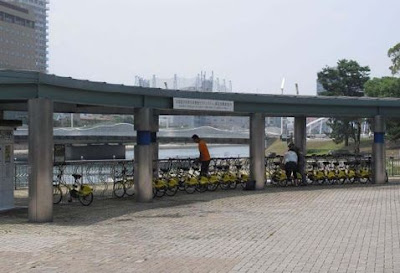 Kitakyushu City, in the Fukuoka Prefecture of Japan has launched “City Bike”, an electric bike-sharing program. In order to earn its title of environmental capital, the city contracted the non-profit Town Mobile Network Kitakyushu to operate the bike-share service. Since March 27, 2010, 116 bikes have been available at 10 stations throughout the city’s downtown area. July 2010 saw an average of 41 people ride a city bike each day.
Users sign up for the program online or at one of three manned stations where they receive a membership card. With their card, a customer can release a key and battery from one of the many electronic stations throughout the city. The customer may can then unlock the bike with the key and insert the battery into the bike, at which point they are ready to ride. The bikes cost 105 Yen (US $1.27) per hour, with additional fees for keeping a bike for over 5 hours.
Source: Japan for Sustainability
image credit: Kitakyushu City
Posted by Jesse Luca Simmons at 11:01 AM Labels: bike-share, bike-sharing, city bike, ebike, Japan