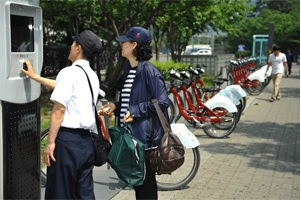 Asia:
Korea - The first day of November 2010, Seoul, Korea officially began an experiment in bike-sharing with a one year pilot program called SeoulBike. Serving just two small areas of this huge metropolis, this month the system with only 440 bikes in 43 stations surpassed 110,000 trips according to Seoul's City Government. Even in such limited areas, each bike is used 1.7 times a day. It would be more, but the initial "no charge" usage period is 4 hours! Each additional 1/2 hour after that is 1,000₩ ($1 USD). The subscription rates are: 7 days for 3,000₩ ($3 USD), 30 days for 5,000₩ ($5 USD), 6 months for 15,000₩ ($15 USD) and at the beginning of the pilot, the 1-year subscription was 30,000₩ (about $30 USD). We'll come back and take a look at this system as it moves on from its pilot status and grows throughout other areas of Seoul.
China - It's getting interesting with China's two mega systems. It was announced by the Hubie Daily News that Wuhan, China's system now has 51,500 bikes, which is about same number as Hangzhou, China's system. Wuhan plans to expand its system to 70,000 bicycles by the end of this year. Hangzhou currently with about 53,000 bikes and expects to have 61,500 bikes by the end of this year. By 2015, Hangzhou projects to have 100,000 bikes according to China's TLNews. In this bicycle race, which of these cities will claim the "Maillot Jaune" (or yellow jersey, to borrow Tour de France parlance) of the largest system in the world at the end of the year? Speaking of the Tour de France, the entire country of France has less than 42,000 bikes in all of its public bike-sharing programs! China is again the Kingdom of Bicycles.
Europe:
France - Last week the 100,000,000th trip was taken on a Vélib' in Paris. As proof that bike-sharing is such a global phenomenon, the event was celebrated by the Japanese television show "Yatta" which means "You did it!"
Australia: 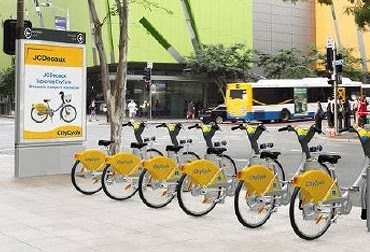 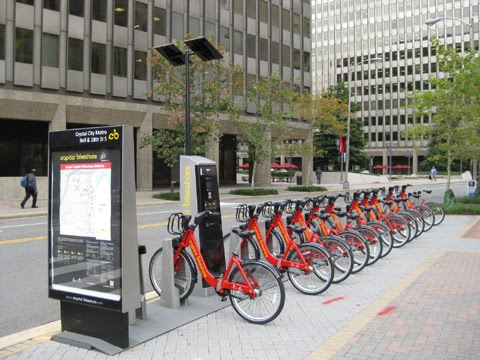 Australia - Brisbane started CityCyle at the beginning of October 2010. There are around 100 stations and around 1,000 bicycles. Washington, DC started Capital Bikeshare at the end of September 2010 with also around 100 stations and 1,000 bikes. Both cities have low lying central business districts and hilly residential areas. Both cities get hot in the summer. The City of Brisbane has three times the population of the city of Washington, but as a region, only one-third the population of the DC-area. A more striking difference is the respective bike-sharing usage numbers. Over about the same period of time Washington has had over 550,000 bike usages and Brisbane has had around 50,000. There are 5,200 subscribers to CityCycle and 15,200 to Capital Bikeshare. Both cities are planning large expansions of stations and bikes for their respective systems during 2011.
We at The Bike-sharing Blog have to ask: What is going on "down under" that has put the Washington system so much on top?
images: Hi Seoul, Brisbane Times, The Bike-sharing Blog, video: Vélib'
Russell Meddin bikesharephiladelphia.org
Posted by Russell Meddin at 9:55 AM Labels: bike share, bike-sharing, Brisbane, Capital Bikeshare, CityCycle, Hangzhou, Seoul, SeoulBike, Washington D.C., Wuhan

Its pretty obvious. Brisbane, like the rest of Australia has compulsory helmets for all ages. The legislation is heavily enforced, accounting for 90% of all traffic infringements issued to cyclists, and 2% of all traffic infringements (in a country where less than 1% of all trips are made by bike). This has had a disastrous effect on utility cycling in this country. It is an absolute impediment to the success of a bike share scheme. From my researches to date, Brisbane enjoys the lowest usage per bike per day (about0.25) of any similar bikeshare scheme worldwide. Second bottom is Melbourne, which peaked last (southern) summer at 0.75

They have started trying to fix the problem while paying lip-service the law buy purchasing 400 helmets and just leaving them with the bikes.