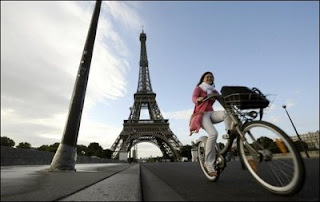 Three years ago today, the bike-sharing world woke up to a revolution in Paris, France. Although, not the first service in the world, Vélib' was definitely the biggest. It made such a media splash, the entire world started thinking "bike-sharing."

In three years, 80 million trips have been made on these ubiquitous gray bicycles. The system has grown from around 10,000 bikes at 750 stations to 25,000 bikes at 1,800 stations which service all of Paris and its first ring of suburbs. There are 162,000 yearly subscribers to the system, down from a high of 200,000, but subscriber's usage is up over 11% according to Ville Rail & Transport.

There have been growing pains for the system with some maintenance and shrinkage problems. It is no longer the biggest system in the world, that honor goes to the one in Hangzhou, China which has 50,000 bikes. Yet the system is healthy and brings in money to the operator, JCDecaux, and the City of Paris.

The latest statistic show that it is used by everyone from all walks of life: 48% are women and 52% are men, 16% are under the age of 25 and 8% are over the age of 56, and 10% of all users are students. There are rumors of a 30% price increase for the daily and weekly subscriptions this fall, but the price of the yearly subscription is to remain a reasonable €29 ($36.85 US).

Let's celebrate bike-sharing by watching this video on how Vélib' began:

The Guardian has a Vélib article today.
London and Paris: a tale of two bike-hire schemes

It says "Rather than get people out of cars – it is reckoned to have substituted only about 10% of car trips in central Paris – it has done a far better job of getting people off public transport. As many as half of all Vélib' trips are estimated to have replaced Metro or bus journeys."

I thought that was interesting. Do you know of a source for that?

According to the NICHES publication on bike-sharing, a 10% reduction in car trips is correct. While this number may seem small, being able to reduce this much motor vehicle traffic is substantial.

Here's a quote from NICHES:
"In the case of the vélo’v scheme, 96% of the users did not use a bicycle in the city centre before. They are new users! The Public Bicycle trips are quite short and replace the following trips: 37% walking, 50% public transport, 7% private car and 4% private bicycle, while 2% would not have made the trip at all without vélo’v. The loss of customers for public transport services is quite low as many users are still holder of a public transport pass or buy individual tickets for other trips. 10% of all vélo’v users take vélo’v in trip chains with public transport. Vélo’v shows a respectable impact on the reduction of private car use, shifting around 1,000 inner urban car trips each day to the bicycle."

I live in Paris and use Vélib' just about every day. I enjoyed stumbling across your article. At the same time, I've learned that the annual subscription is going to be increased by 30%. This is supposedly to cover the cost, previously underestimated, of vandalism. Terrible! Any info on comparative vandalism stats between bike-sharing cities? Incidentally, I came across your Bike-sharing blog because my blog is called Paris-Sharing!

Paris Sharing,
As written in the original post, the rumor is for a 30% increase in the price of the daily and and weekly Vélib' subscriptions this fall. This was circulating before the 3 year anniversary of the program on July 15th. Now, there is also a rumor, not at all confirmed by any parties involved with Vélib', that the annual subscription might increase to €40-€45 with but with a 45 minute initial usage time at no charge or even a possible two tier annual subscription: €29 for 30 minutes at no charge and €45 for 45 minutes at no charge. Let's wait and see what the Mairie de Paris has to say.

Erik,
Eric Britten was quoted as saying Vélib' has reduced auto trips by 10%. I would not use the word "only" for a 10% reductions. Any and all reductions are a positive.