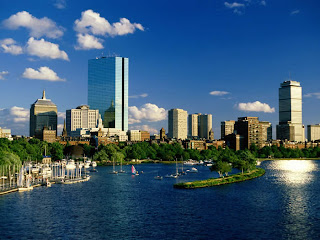 Yesterday the United States Federal Transit Administration awarded a $3 million grant to the Massachusetts Bay Transit Authority (MBTA) to fund the Boston Bike-share Project: "An innovative and truly transformational project, the Regional Bike Share System is a multiple-city bike sharing system making thousands of bicycles available throughout the Boston metropolitan area with the swipe of a card."
According to the Boston Globe, Nicole Freedman, the head of the city's Boston Bikes program, said, "This takes us over one of the main hurdles with bike share, which is having enough funding to have a launch size that we’re confident will succeed. Too few bikes and rental stations could doom the program to irrelevancy." This money will allow Boston to proceed, after this year's postponement due to insufficient funding, to create the large bike-sharing program that we reported in The Bike-sharing Blog on August 12, 2009.
Much credit goes to Boston Bikes and the MBTA for creative thinking about Bike-sharing funding for systems in the United States. This grant to Boston reinforces what The Bike-sharing Blog has championed: Public Use Bicycles are an integral part of a city's public transit system. It extends, compliments and enhances all transportation options. That sound of a Boston Bike-share bell 'bing' should be a wake up call to the many city governments in United States, which are thinking about Bike-sharing. The Federal Government thinks it's a good idea.
image: Boston College
Russell Meddin bikesharephiladelphia.org