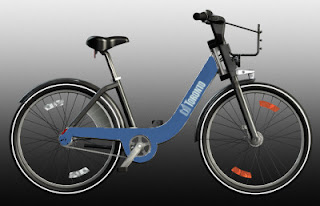 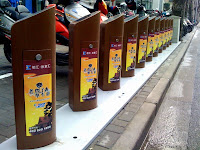 Many thanks for your cool blog. I used Bixi this past weekend in Montreal, my first experience with bike-sharing, and I was amazed. It was like a foretaste of heaven. Anyway, I live in Boston, and I'm trying to figure out if Boston is actually going to roll out a system this summer. (I'm afraid to get my hopes up.) Do you know anything?!

Toronto City Council approved the Bixi deal and agrees to provide a loan guarantee, provided some milestones are met. (I'm not sure why any milestones are necessary when we know it's successful elsewhere). These milestones include signing up 1000 membership pledges and getting $600,000 in sponsorship (for 2 years) by November 2010.

One or two Bixi stations will be on display throughout Toronto for the summer so people can try them out and sign up before the system launches next May.

Toronto the cowardly is finally getting on board.