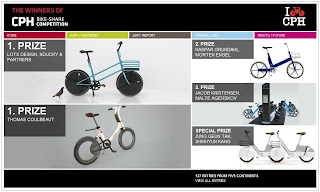 Winners of the Copenhagen Bike-Share Competition

The City of Copenhagen announced the winners of the open competition to design a new Bike-sharing program for the city that has had bike-sharing since 1995. The competition originally announced in September had a November 18, 2009 submission deadline. See the Bike-sharing Blog post. First Prizes go to OPEN BIKE by Lots Design, Koucky & Partners and Green Idea Factory from Sweden and Germany and myloop by Thomas Coulbeaut from Japan. See all the fascinating entries at CPH Bike-Share Competition

Nice article about the competition and its results in this artice by April Streeter for Treehugger :