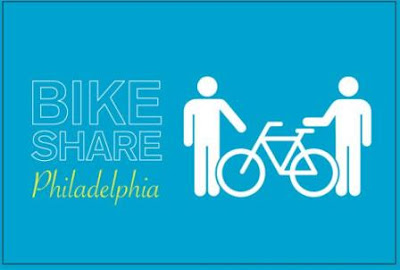 For the anniversary of the Bike Share Movement in Philadelphia, an operational solar powered, WIFI enabled 3rd Generation Public Bike Systems station and bicycles from will be on display and available for the public to try. Directions: View Larger Map

In Philadelphia:
Thursday, January 15, 2009 11AM to 6:00 PM
36th and Walnut Streets in front of the University of Pennsylvania Book Store

The excitement continues in Philadelphia with:

The creators of Streetfilms, where you'll find an eclectic array of 'livable streets' films from all over the world made to inspire change on the streets of your neighborhood, will show all its bike-share videos and a great selection of 'livable streets' films on the "Big Screen" in support of Bike Share Philadelphia as one of the Academy of Natural Sciences Town Square Series. Streetfilms and Streetsblog are the political mobilizer for the Livable Streets movement. They are part of a growing coalition of individuals and organizations in cities around the world working to transform our cities by reducing dependence on private automobiles and improving conditions for cyclists, pedestrians and transit riders. They have picked the anniversary of Philadelphia's Bike Share movement to showcase their videos on bike-sharing and livable streets.