Freewheelin' Gears Up for the Political Conventions 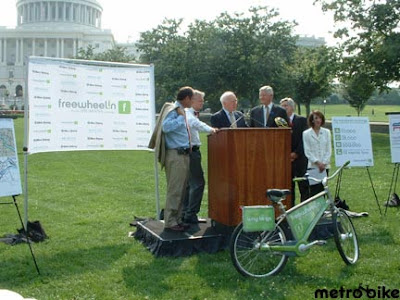 This morning Representatives Blumenauer, Oberstar, Petri, and Wamp hosted a news conference on the West Lawn of the U.S. Capitol announcing a "bike-partisan" challenge at the Democratic and Republican National Conventions in September. Humana Inc. and the not-for-profit Bikes Belong are bringing 1,000 free bikes to the political conventions as part of Freewheelin'. 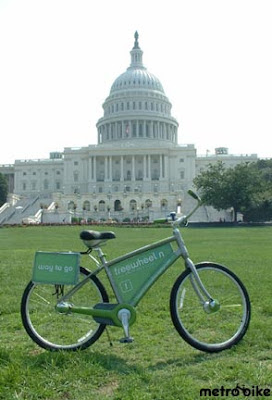 The Congressmen challenged convention delegates and all convention-goers to get on a bike and collectively participate in 10,000 bicycle rides and tally-up 25,000 miles. The Representatives noted that the benefits of bike-sharing are the deficits it produced - and the only good deficits you're likely to hear about these days - a deficit in obesity and pollution.

Freewheelin' is normally an unattended bike-sharing technology, however, at the conventions it will be attended by volunteers who will introduce conventioneers to bike-sharing. After each convention, 70 bikes and seven stations will remain in the cities with the remainder of the bikes donated to social programs.

If SmartBike D.C. doesn't launch this August as is hoped, Freewheelin' in Denver after the Convention, when it becomes unattended, could be the U.S.'s first high-tech bike-sharing program. Stay tuned bike-sharing fans...
Posted by Paul DeMaio at 3:14 PM Labels: Freewheelin'

That is awesome. I really appreciate what you're writing about here. I've been a biksharing advocate for a long time. I'm pretty excited about the conventions and freewheelin too. I also love Batman. So I made a movie--you might be interested in watching. I took the liberty of mentioning your excellent blog in my description so people can come here and find out more about bikesharing.

Here is the video.