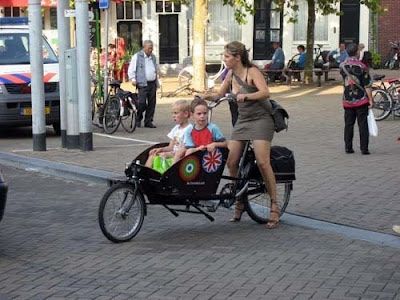 And, regarding the title of this post, "Why Wasn't Amsterdam First?" Amsterdam actually was the first to have bike-sharing back in 1968. Of course their White Bikes didn't have smart cards and wifi of today's bike-sharing technologies, so the bikes were stolen immediately. However, Amsterdam's 2nd attempt with bike-sharing will surely go much better.
Posted by Paul DeMaio at 6:03 PM Labels: Amsterdam

The white bike program was a political stunt that was a bike share program at the same time. It was thought up by a Dutch counter-culture movement in Amsterdam called the Provos (i.e., to provoke).

The white bike plan was, not unlike the Velib model, aiming for 20,000 bicycles to be left around the center of a car-free Amsterdam, all donated and all painted white.

As they say, bicycling has a great past ahead of it.

Even more surprising, none of the many Dutch cities that are even more bicycle-friendly than Amsterdam (where unaccustomed tourists stepping into bike lanes are a constant hazard) have shown any interest yet.
Considering that the average Dutch person owns 1.12 bicycle there will probably be limited interest among locals.

Another consideration is that Holland has a program of cheap and clean bikes available at each train station for rent for the day. We do not need a share program. The only successful share program I know of in Holland is in our National Park. Bikes are painted white and left at the gate to the park. You pick it up to cycle in the park (Kroller Muller, Apeldoorn)

While Amsterdam is an awesome cycling city, it would be less cluttered if most people used a bike share. Public space is premium.