The Trial of Trip-Based Fares

A goal of publicly owned bike-share systems is to provide safe, cheap, and widespread transit for its citizens and visitors. While annual memberships offer this for frequent customers, the 24-hour membership that many systems have does this poorly for infrequent and would-be customers. To improve upon this, the Washington, D.C. region’s Capital Bikeshare has embarked upon a new pilot fare – the $2 “Single Trip”. 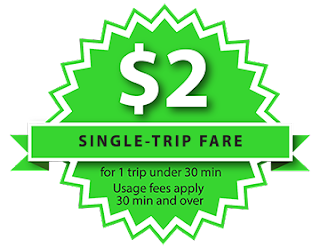 Unlike the common duration-based bike-share fare types, lasting anywhere between 24 hours and 1 year, the trip-based fare type is more transit-oriented as it’s focused on the lowest common denominator – the trip itself – rather than a time period. The Single Trip fare’s $2 cost gives a customer up to 30 minutes of ride time with greater usage fees for longer trips. Capital Bikeshare’s Single Trip fare is one of the least expensive fare options of the “buffet model” of pricing in North America that was discussed here on The Bike-sharing Blog on September 14, 2014. The D.C. region joins Pittsburgh’s Healthy Ride with their similarly priced “Pay As You Go” fare.

Offering a trip-based fare in an established duration-based fare structure creates great risk. The risk is that revenues would drastically drop as customers who were formerly paying for a higher priced 24-hour membership, instead decide to purchase a trip-based pass at a quarter of the price. Less revenue would hurt a system’s cost recovery and make the system more reliant on other revenue sources, such as public subsidy or more advertising, if these options were available. To many public and non-profit systems, they are not.

The other possible outcome is that the trip-based fare would induce more trips by those for whom a 24-hour membership cost were too high, but who would pay the cheaper $2 fare which is comparable to the price of other modes of transit.

It’s unknown at this point which way the wheels will turn on trip-based versus duration-based revenues, however things are looking good. Over the past year new and established systems in North America have been inching towards lower-cost trip-based fares, such as with Montreal’s “One Way” pass for $2.95 CAD ($2.28 USD) and Philadelphia’s “Walk-up” and Minneapolis/St. Paul’s “Single Rides” passes – both for $4. There is also the “Pay As You Go“ fares of Social Bicycles that are charged by the minute -- another good solution.

Whatever name the pass goes by, the trip-based fare will hopefully increase bike-share trips, generate greater revenue, lower the financial barrier for people who need just one or two trips rather than 24 hours of trips, and make riding a bike a legitimate 2-wheeled transit option in a country where bike-riding for transport is not commonplace. Further, it could make bike-share resemble the more common fare structure of other modes of transit by removing the membership aspect and pricing it similarly to bus, streetcar, and rail.

At an historic time in the Washington, D.C. region where the country’s 2nd most highly used subway system has begun a nearly year-long maintenance surge of single-tracking and station closures for weeks at a time starting today, Capital Bikeshare’s Single Trip fare will hopefully provide an economical and convenient transport option for the thousands of commuters who are looking for another mode in which they can rely upon for the next year and beyond. If Capital Bikeshare and other innovative bike-share systems are successful with the trip-based fare, it could be a new model for bike-share systems to emulate.

It would be nice if we could have one device or key-fab that provides us the option of using bikeshare, MARC or Metro. You know, like an integrated transit network.