The Bike-sharing World the Last Week of December 2015

As 2015 comes to an end, it is time to think about recapping the numbers for this year's achievements in public use bicycle cities around the world.

This animation shows the growth of the public use programs in the world since 1993 through 2015 and beyond. As this year closes, there have been around 120 new cities so far that have started bike-share systems. China leads the way with around 60 new cities, while the USA saw around 20 new cities join this movement.

Blue: New City - Grey: Terminated - Yellow: Planned
Using the data from The Bike-sharing World Map, a comprehensive look at 2015 will available on this blog in early January 2016.

Currently, there are around 980 cities that have automated, 3rd generation, information technology bicycle programs that allow 'A' to 'B' pick-up and drop-off. The total number of public use bicycles in operation throughout these cities is around 1,258,500. New this year is the inclusion of  'Pedelecs', electrical assist pedal bicycles, which comprises around 9,300 bicycles of this total. This subset has been growing extensively in the last year and will only continue to do so into 2016.

After years of utilizing fairly low grade bicycles in public services, many Chinese cities are finally upgrading them. The Hangzhou GST Development Company, the research and development arm of the Hangzhou Public Bicycle Program, has created a GPS enabled "smart bike" as part of the IBSplus system to be first deployed in Laingzhu, a town near Hangzhou.

The same company is also creating a single access and payment card called "ibicycle", which can be used to access all of the 147 services throughout China that utilize their equipment, according to the Kim Tong News Agency. Additionally, The Hangzhou GST Development Company is developing a mobile phone application they have named "icycle", which can be used to access, pay, and map the bicycle usage.

The other major Chinese company, Changzhou Wing Eversafe Public Bicycle Systems, has already issued a single access card to 44 of the 150 cities that use its equipment including the Russian city of Blagoveshchensk on the Chinese border.


This month Jincheng, Shanxi added 3,000
Pedelecs to its current 5,000 pedal bicycle service, making it the first and largest deployment of pedelecs not only in China, but in the world. Jincheng joins Barcelona and Milan with mixed pedal and pedelec bicycles in their fleets. With only a few days in operation, it is not known if the new pedelecs are being used as much as in these two other cities.

North America:
USA:
Birmingham,
Speaking of mixed Pedelec and pedal services, ZYP Bikeshare has brought solar-powered electric assist bicycles to the deep South of the United States. Since its debut in October, around 2,800 members have ZYP'ed around town, making the service's name a verb to describe the experience. 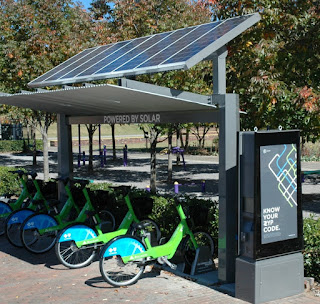 Around 25% of the current fleet of 300 bikes in 30 stations are pedelecs, which help the residents and visitors conquer the hills surrounding the Central Business District (CBD). This spring the service will grow to 100 pedelecs and 300 8-speed pedal bikes in 40 totally solar stations. All the bikes are 'smart GPS-enabled' and the illuminated kiosk can dispense a rechargeable card for those who are only occasional users. As with many services, the bikes can be accessed using a mobile phone application.

ZYP'ing around the Birmingham's CBD is now "no sweat" with a little pedal assist!