Spare a Dime? Melbourne Looking for a Sponsor 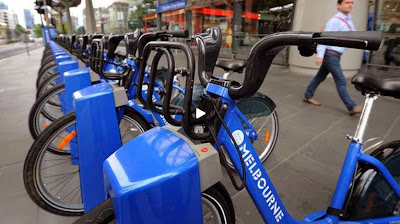 The State of Victoria in Australia is looking to build Melbourne Bike Share into a public-private partnership with a sponsor that will expand the service from its roughly 50 stations into more parts of the city and suburbs in exchange for naming and branding rights, according to The Age newspaper.

The Age states, "Bicycle Network Victoria's Garry Brennan said Melbourne Bike Share was currently too small and sparse and could not be viable without expansion.

"Patronage has grown every year since the scheme was launched in 2010. It had its best-ever month in January, when 18,809 rentals were recorded. Last month there were 12,781 rentals, an average of 421 rides a day," notes The Age. The January record is just over 1 trip/bike/day with the roughly 535 bikes on the street..

Compared to Capital Bikeshare in the Washington, D.C. area where there are 300 stations, versus Melbourne's roughly 50, there was a record of 296,000 trips taken in August 2013. Even taking into account Capital Bikeshare being six-fold larger than Melbourne Bike Share, and the network effect of a larger service which leads to more trips being taken, this is a pretty marked difference.

For Melbourne and the State of Victoria to let Melbourne Bike Share become the world-class bike transit service that it should be, Victoria could once again consider removing its helmet law for adults. It's holding back use of its bike transit system and in the desire to protect the public's well-being, may be an over-protective function which has a result of lowering physical activity as studies have suggestion, leading to an overall negative net result.

Bike-sharing is a relatively safe mode of transport. In the USA there have been no fatal bike-share crashes in the country's short 5-year experimentation with the concept. For comparison, Capital Bikeshare has 88 reported crashes in the 3 years since its inception a couple months after Melbourne Bike Share launched and over 5,894,375 trips. This is one reported crash for every 66,981 trips.

Things aren't Top Hat up in Brisbane, Queensland either. The scheme has only had a little over 500,000 trips in its three years since October 2010. What should have been a financial benefit to the city hasn't materialized because of low ridership, according to The Brisbane Times. Changing the fare structure, tying payment with a transit card, and increasing the hours of operation haven't been able to overcome the damper that the mandatory helmet law does to ridership. Again from The Brisbane Times, Paul French, of the Brisbane Bicycle User Group, said his group is still hopeful the State Government would take on board the proposal for the scheme to be exempted from helmet laws.

In other sponsorship news from the Commonwealth, Barclays has made public that it will not continue its sponsorship of the London Cycle Hire service in two years once its contract ends. This article from Mirror isn't clear whether Barclays sees the brand damaged after, sadly, a customer was killed by a tractor trailer -- being the service's first fatality in 3.5 years of operation. Or the sponsorship package changing as Transport for London's Graeme Craig states, "Cycle hire will become part of a much wider and larger cycling sponsorship offer encompassing cycle hire and the major new commitments made in the Mayor's cycling vision - new flagship segregated routes through the heart of London, new Quietway backstreet routes, along with cycle training and potentially other forms of active travel."

Either way, looks like Boris Bikes may be getting a new paint job in two years. And I was just getting comfortable with Barclays blue.


photo credit: The Age
Posted by Paul DeMaio at 8:39 AM