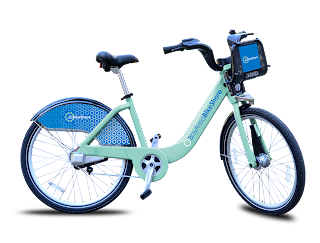 Last week, Bay Area BikeShare debuted in five California communities: San Francisco, San Jose, Palo Alto, Mountain View, and Redwood City. Billed as a "pilot program", it has the possibility of changing the direction of bike-sharing in North America. Although, it is not the first North American regional bike-sharing program, Capital Bikeshare and The Hubway are regional, but it is the first single program that serves non-contiguous cities. It takes to the extreme, the concept of using personal mobility to solve the "first mile/kilometer" and "last mile/kilometer" problem of fixed route transit.*

With Bay Area BikeShare, a user can pick up a shared bike and ride to a Caltrain Rail Station, dock the bike, ride the train to another select rail station, then take another shared bike to a final destination. This program could become the template for all subsequent programs where there is inter-city transit.

The Bay Area program allows true A to B transportation over a large region.This program takes the European rail station bike system concept like OV-fiets, Scotty Blue Bikes, Call a bike, Publibike, and the new British Bike & Go into being real bike-sharing and not bike rental. Unlike the European system, with the Bay Area program bikes can be returned to any bike station. There is no penalty when the bike is docked at another bike station rather than the one from where it was taken.

With success, we hope, Bay Area BikeShare will quickly expand to its original proposed starting size of 1,000 bikes in 100 stations. Then as it comes out of training, bring bike-sharing to the entire Bay Area.

Since we know everyone can't get enough information about bike-sharing, whether it's new, old, or the future, there is a place to get that shared information. The Shared Use Mobility Summit in San Francisco on October 10th and 11th will have demonstrations and panel discussion on bike-sharing. There will be speakers and experts on everything that is bike-sharing and possibly debuts of new bike-sharing systems. Oh yes, there will be segments on car-sharing too!

There is still time for discounted registration until September 16, 2013: Register Now
The web address for the Summit: sharedusesummit.org. If you or your city are planning a bike-sharing program, this Summit should not be missed! 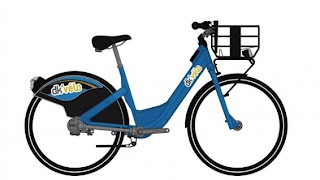 A little over 73 years ago this summer, thousands of boats and ships streamed out of the French port of Dunkirk to cross the English Channel. As of September 2, 2013, in a bad analogy, English tourists to this port city will see that Dunkirk's bike-sharing ship has come in with the start of dk'vélo. Beginning with 100 bikes in 20 stations the program is planning to grow to 280 bikes in 34 stations. In keeping with the bike-sharing movement towards transit integration, dk'vélo's €10 annual pass ($13.00 US) is only €5 when a subscriber also has the dk'bus pass. The 24-hour pass to bike around Dunkirk is only €1, allowing each trip of 30 minutes or less at no extra charge. The next additional 30 minutes of continuous use is another €1 and then €2 each additional 30 minutes thereafter. 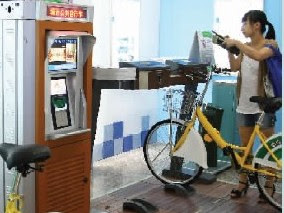 The newest replacement bikes for the Hangzhou Public Bicycle Service will have two different bike station locking devices according to Hangzhou.com.cn. Since 2008, Hangzhou has utilized a system for locking bikes similar to the French CycloCity "bornette" that requires a down tube side mounted locking device for anchoring the bicycles to the single post or column.

Because the Hangzhou system is now installing three sided glass wall multi-purpose covered bike stations, it is cheaper and easier to install a single rail along the back wall of the station, similar to the Clear Channel SmartBike system, for docking the bicycles. Each lock on the rail has a card reader and is interactive. The new bicycles will be able to use either system. The Hangzhou Public Bicycle Tech Center is marketing this new system to other Chinese cities.

A friend to the Bike-sharing Blog in Brisbane, Elliot Fishman, has recently published a study on the Barriers to Bike-sharing in Australia: The Barriers and facilitators to public bicycle scheme use: A quantitative approach. Generally these studies carry a substantial price for a copy, but for this month and next, Elliot Fishman's study is available at no charge: Download at the web site: Transportation Research Part F.

THE WORLD:
There are now nearly 4,000,000 page views for The Bike-sharing World Map. There is also a new easy web address for the map: www.bikesharingworld.com

Assuming you're going, I look forward to reading about your experience at the Mobility Summit.