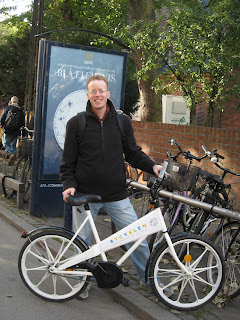 The City of Cyclists won't be modernizing its bike-sharing service any time soon due to a decision by the Copenhagen City Council. They recently voted not to fund a modernization of one of the earliest bike-sharing services, Bycyklen, which was born in 1995 and is still in operation. Rather than smart cards and solar stations, this service uses a coin deposit lock and the honor system which had worked reasonably well in its early years, but hasn't been maintained properly by its present operator -- AFA JCDecaux.


According to The Copenhagen Post, Ayfer Baykal, Copenhagen's deputy mayor for technical and environmental affairs, "defended the city’s decision not to invest in the cycle sharing scheme this year.
“They’re junk, I agree with [the Danish Cyclist Federation] on that issue. The city bike scheme, as it exists today, needs to be updated. It is old and outdated. But right now we need to prioritize.”
Deputy Mayor Baykal continues, “The city bike scheme is primarily for people coming from outside the city because Copenhageners have their own bicycles. I have chosen to prioritize better cycling conditions in Copenhagen through improved bicycle lanes and bicycle parking instead of the bicycle sharing system.”

What better way to help tourists experience the city than the way Copenhageners do - by bike? If a Bycyklen or other bike-share bike isn't available to a tourist, he or she could just as easily use a taxi or rent a car. To the environment, it doesn't matter whether the pollution comes from a resident or a tourist, but rather that the pollution is created. Also, tourists are the most profitable user segment as they contribute more financially than residents do through day membership or per minute fees.

While Copenhageners are bike-friendly, do they always bring their bike with them? I too live in a city with a growing bike mode share and frequently go by bike, but sometimes I just don't have my bike with me. The local bike-share service, Capital Bikeshare, frequently helps me get from point A to point B. I could otherwise take the train or drive.

The 150 million Danish kroner (26 million USD) will instead be used to make cycling improvements in the city, which is not a bad second place project, however, a piece of reality in how local governments are stretched thin for funding for many deserving projects. Additionally, the end of Bycyklen is near as the contract with AFA JCDecaux for the service expires October 31. Not sure what will happen after that with bike-sharing.

On a personal note, Bycyklen got me interested and excited about bike-sharing back in 1995 as I read about the new Bycyklen on-line and went to Copenhagen for a semester abroad to learn about bike-sharing and this quaint modern bike-friendly city which I, in turn, fell in love with. I was back last year in a professional capacity to work with the Cities of Copenhagen and Frederiksberg and DSB in developing the public tender for a new operator and vendor. Hopefully the Council will see the value of modernizing the bike-sharing service not only to regain a worldwide leadership in bike-sharing that it once had.
Posted by Paul DeMaio at 9:17 AM Labels: bike share, bike sharing, bike-share, bike-sharing, Bike-sharing Blog, bycyklen, Copenhagen, JCDecaux, MetroBike

Typical Danish ignorance on the value of bikesharing. Somehow I'm not surprised. Amazing that they still can't think outside of the existing frame that 'bikeshare is for tourists' despite the RFP a few years ago for a program that clearly called for a new system that would work for tourists, commuters and 'locals in a pinch'. Probably doesn't help that the Odense program isn't taking off.

Haven't they noticed that Holland, which bikes more than Denmark by the way, has one of the best bikeshare programs in the world that works ONLY for local commuters?

By the way, you often find those bycyklen bikes snagged by locals in Christiania and elsewhere outside of the official zone.

Wish i could get my hands on one of these old bikes. Anyone know who made them? Or where I could buy one? http://bike-sharing.blogspot.com/2012/10/bycyklen-is-dead-long-live-bycyklen.html

Peter, these bikes were made by Cycle Importers of Scandinavia.