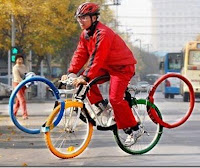 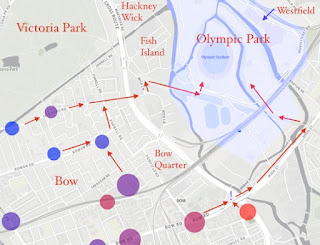 From our good friend Oliver O'Brien are instructions on how to use Barclays Cycle Hire to travel to the London Summer Olympics. It is not as easy as it should be, as there are no Barclays stations allowed at the Olympic Park because Barclays Bank is not the Official Financial Institution sponsor of the 2012 Summer Olympic Games. In his "How to 'Boris Bike' To Olympic Park" he also tells which entry gates have the least wait time to get into the Park. Oliver O'Brien is the creator of the Bike Share Maps which are great companions to The World Bike-sharing Map.

So if you are in London this week for the Olympics, and you want to bike-share to the games, rely on O'Brien' s tips and Map to get you to the Olympic sites. 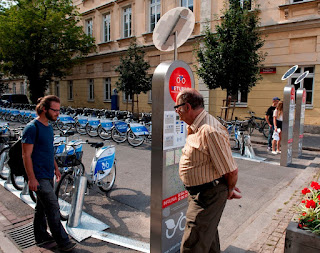 As mentioned in the last week's post, Warsaw, Poland began Veturilo -- Warsaw Public Bicyles on August 1, 2012. Veturilo means vehicle or transportation in Esperanto. The name was picked through an internet contest. 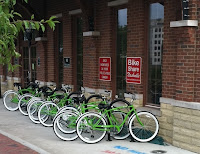 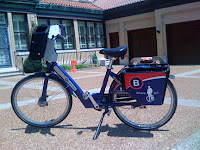 This week the City of Nashville, Tennessee announced it will begin a new automated 3rd generation - 200 bike, 20 station - bike-share program with B-cycle this fall. What makes this interesting is that Nashville has a successful 'no fee' 1st generation system, Nashville GreenBikes, which is to remain in place. This could be a great opportunity for Nashville to emulate some European bike-share cities which have both subscription short term bike-sharing (VLS - vélo libre service) and long term municipal bike borrowing (VLD - vélo location longue durée). With VLD, residents of a city have the opportunity to borrow a bicycle at little or no charge for a term of one week to one year. There is generally a refundable damage/theft deposit and in some cases the terms are renewable. The borrower is totally responsible for the bicycle and maintenance during the term. These bikes are not part of the short term system and cannot use the docking stations. The idea behind these bicycle loans, as in 3rd generation bike-sharing, is to facilitate bicycle-use for transportation. VLD is also viewed as an entry into bicycle ownership for those who initially cannot afford it. A February 2012 article in  The Bike-sharing Blog wrote about the Bordeaux, France VLD program, Bicycle City of Bordeaux.

This was to be the first week of the New York City bike-share program, Citi Bike. New York's ciclovia, Summer Streets, would have showcased the new system. The stated launch date for Citi Bike was July 31, 2012. The anticipation in North America was great. As the first really large program, New York was to have 10,000 bikes in 600 stations in its first year. However, in mid-July, the The New York Times reported Citi Bike would not start as scheduled.

In a radio interview also according to The New York Times, New York Mayor Michael Bloomberg attributed the delay to, “software, plain and simple.” He said, “The company that’s managing it changed vendors to have new software,” referring to Alta Bicycle Share, the system's operating company. He continued, “and it just doesn’t work yet.”

In Chattanooga, Tennessee, the Chattanooga Bicycle Transit System, using the exact same equipment and software as the New York system, also operated by Alta Bicycle Share, is up and running and has been for almost two weeks. The software seems to work there.

The hardware and software supplier is Public Bike Systems Company (PBSC). When asked about the problem, according to The Montreal Gazette, the PBSC spokesperson Michel Philibert said he could not comment on the delay in New York. Asked if New York’s delay is related to the software problem, Philibert said, “What I can tell you is we are in line with our delivery schedule – we are delivering the bikes and stations,” he said. “We are respecting our contract with Alta Bike Share.”

To add to the confusion, The New York Post alluded to "inside information": one insider said the program might be shelved until next spring if the delay reaches late October. “No one wants to do this in November,” the insider said. “You’d be looking at Spring [2013].” The Post quotes a source saying that Alta Bicycle Share has asked the lead sponsor to accelerate payments of $3.5 million in case the program is delayed until next spring and runs out of cash.

For all of us expecting New York bike-sharing, this is all very curious. But take heart, if you are in New York City for Summer Streets, a vacation, for business or resident, you can satisfy your bike-share desire by using Decobike in Long Beach, New York, which is just east of Brooklyn. It is a quick train ride there and it's on the ocean. You can enjoy the bikes and beach!