The Bike-sharing World - the Last Week of May 2012 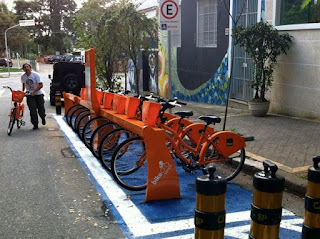 Bike Sampa starts city-wide bike-sharing in Brazil's largest city -- São Paulo. As its sister program, Bike Rio's Samba, Sampa is a joint venture of Sertel, Mobilicidade, and sponsored by Banco Itaú. Although beginning with 100 bikes in six stations this week, the service plans to have 1,000 bikes in 100 stations by the end of the year and for 3,000 bikes by 2014. Initial sign up is online at bikesampa.com with a R$10.00 ($5.00 US) fee for a pass that is valid until March 2013. Each time a bike is taken out there is no charge for the first 30 minutes of use, then R$5.00 ($2.50 US) for each additional 30 minutes. There is a 15-minute wait time between each time a bike is returned before another can be taken again to avoid additional charges.

The second bike-sharing system in Oklahoma debuted last week in Oklahoma City, called Spokies. The first, Tulsa Townies, was also the first 3rd generation system, albeit with a recreational focus, in North America (see the Bike-sharing Blog July 2007 and the Bike-sharing Blog August 2011). There are 95 Spokies in 6 stations. The system uses Sandvault stations and Worksman Bicycles. It is necessary to sign up online and the cost is $75 for a one-year membership, $20 for a one-month membership, and $5 for a day pass. There are unlimited 30-minute rides with no wait period after returning a bike before taking another. Each additional half hour of continual use is $2. Generally, North American bike-share systems are theft free, but within the first week, two men at a Spokie station swiped bikes instead of swiping their credit card. According to News 9, the two men were arrested and the bikes recovered.

Chattanooga, Tennessee
Although scheduled to have launched (see the Bike-sharing Blog April 2012), technical difficulties have prevented deployment and use of the Chattanooga Bicycle Transit System. Membership sales have been suspended according to their website. News on the system can be followed on the Bike Chattanooga twitter account. 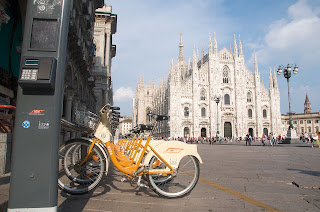 BIkeMi is once again increasing its size. With 128 stations it is the largest city system in Italy. According to BikeMi, there have been in one day over 6,600 usages of the close to 1,500 bikes in the system.