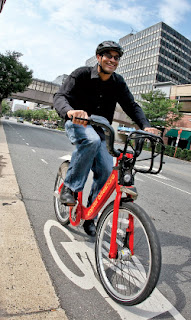 For a new mode of transit and a fledgling service, Arlington’s portion of Capital Bikeshare (CaBi) finished its first year with a cost recovery rate that other transit providers in the U.S. would find admirable. The regional CaBi service launched on September 20, 2010 and Arlington’s portion achieved an 81% a 53% cost recovery – the ratio of revenues to operating costs – during its first year. Compared to other bikesharing services in the U.S., CaBi did well considering it was the only year-round service at the time. Compared to other modes of transit in the U.S., Europe, and Asia, CaBi fares well, but still has a way to go.

Arlington’s portion of the CaBi service had $218,000 in revenues (from memberships, user fees, and sponsorships) and $270,000 in operating expenses from Alta Bicycle Share. Additionally, marketing and management costs were $142,000 for a total Year 1 expense of $412,000, which equates to revenues covering 53% of program expenses. Operating expenses were $155 per bike per month. If not including marketing and management expenses, then Arlington's cost recovery is 81%.

We’ve blogged about bikesharing being an economical transport mode for both customers and local governments, but now we have the data to document it. CaBi began operations with 14 stations and 110 bikes and completed its first year with 18 stations and 113 bikes. Only three bikes were needed to be added as the service shifted from a 67% bike-to-dock ratio to 50% to improve bike balancing operations. Arlington’s portion of CaBi benefitted from being a regional service with D.C.’s 100 stations.

We have lots of impressive data to share on CaBi’s first year of service from 9/20/10 – 9/19/11. Here are some interesting Arlington-specific CaBi facts:
We’re well into our second year and now up to 23 stations and 145 bikes. Service expansion is continuing in the Rosslyn-Ballston corridor with 21 more stations and 144 more bikes coming online in the spring, nearly doubling the size of Arlington’s service. Additionally, we have funding to add another 25 stations in FY13. We look forward to increasing CaBi’s impact in the County by reaching more neighborhoods and folks, making CaBi an integral part of everyone’s lives – whether you live, work, or play in Arlington.

Congratulations not only for the number of rents but also for the transparecy. Capital Bike Sharing is a good example of how bike-sharing scheme should provide data

I agree on the congratulations. It is important to post a look at the costs of the system.