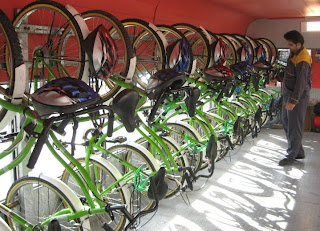 Interesting! Which district is this in?

Central Tehran is utterly hideous for cycling (except Friday mornings). There used to be a few bike lanes around but they've faded and are now little used.

Men and women are able to hire and ride bikes unrestricted in Chitgal Park, a short ride on the metro from downtown - it's much more pleasant than trying to compete with a million buzzing little motorbikes!