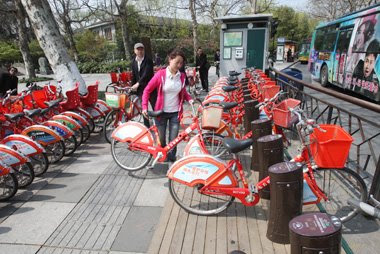 UPDATE 8/3/09: Due to a translation error, the point-of-sale machine "imbedded into the bike" as described above is not actually part of the bike, but rather it is adjacent to the bike in a system that resembles Velib'. (Although the former method would be much cooler.) Customers may use the program's "Z card" or local transport "IC card" to rent a bike. Credit cards are not accepted on the system, rather only pre-paid cards.
Posted by Paul DeMaio at 4:03 PM Labels: China, Hangzhou, mega, Velib'

Paul, what do they mean by "A point-of-sale machine is imbedded into the bike" ?

And do you konw more about the leasing model?