Paris' Woes of Theft and Vandalism 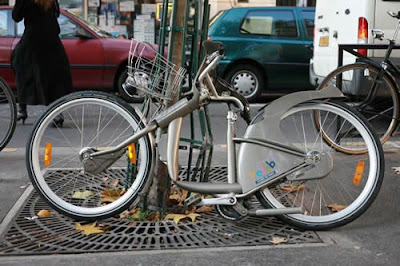 In a year and a half of operation, 7,800 bicycles have disappeared from Paris’ highly successful bike-sharing program as reported by LeParisien. On top of that, another 11,600 have been vandalized. To cope with this grave problem, 500 mechanics work on 1,500 bicycles each day to keep the system running. Even in cold weather, there are 78,000 average daily usages on the system. At the end of January 2009, a city wide transportation strike resulted in the doubling of Vélib' usage from the week before.

JCDecaux, the advertising company that operates Vélib' for the City of Paris, is considering closing the stations which are the most vandalized. The price tag for all this mischievousness has been very high for the company. According to the BBC, "Since the scheme's launch, nearly all the original bicycles have been replaced at a cost of 400 euros ($519, £351) each." Not only do the mechanics travel from station to station every day to pick up or fix damaged bikes, but also go from Police station to Police station to pick up Vélib' cycles in either good or damaged condition which have been found by the police overnight.

Even with these maintenance nightmares, the system is expanding with six new suburbs of Paris connecting to the system next month. With over 42 million uses and bikes traveling 10,000 km in a year, Vélib' is a marvel for everyone to watch and learn.

Update: According to Streetsblog, "The BBC's portrayal of a mortal threat... is best understood as a negotiating ploy on the part of JCDecaux. 'Decaux is using media sensationalism in order to obtain more money from the city of Paris,' said Denis Baupin, who as Deputy Mayor for Transportation oversaw the Vélib' launch in the summer of 2007." - editor

Coincidentally, JC Decaux's contract is coming up for renegotiation.