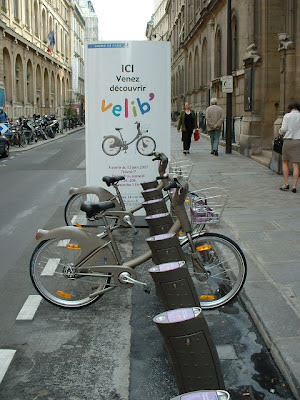 The countdown is less than 24 hours until Velib' launches 10,000 bikes in Paris. When I visited with the JCDecaux and Paris representatives in June, they were already having trouble sleeping as the preparations for such a large undertaking are immense. However, they are a committed bunch and I'm sure are creating what will no doubt be a successful program.

I came across this article in the Edmonton Journal, which has the first dollar amount associated with Velib' that I've seen - $124 million. It's a tremendous commitment by Paris for clean air, improved health of its citizens, and a big step towards lessening traffic congestion. Maybe Paris could become the next Copenhagen?

The 90 million-euro ($124-million US) effort financed by JC Decaux SA, the world's second-largest outdoor advertiser, will enable residents and tourists to pick up a bike at any of the 750 stations around the city and return it to another. The first half-hour will be free.

Posted by Paul DeMaio at 11:29 AM Labels: bike-sharing, Velib'

Did you see the NYTimes article today?