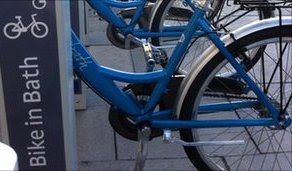 Europe:
Bike-sharing cleans up in the United Kingdom. This morning is the official launch of Bike in Bath. This 58-bike, 4-station system has been in trials in Bath, England for two weeks. Though small, it is of big interest because the system is equipped and operated by Bicincittà. This will be the first Bicincittà system in the UK and complements the 70 bike-sharing programs it operates in Italy. The system is funded by the European Union-backed Civitas Renaissance initiative, which helps cities across Europe achieve more sustainable, clean, and energy-efficient urban transport systems.

Mid-September brought a new bike-sharing program to France's 4th largest city, Lille. V'Lille merges both a self-service component and longer terms bike rentals into the same system. There are 1,100 bikes in 110 self-service stations. The system will expand in April  of next year to serve not only Lille, but the contiguous cities of Roubaix, Tourcoing, and Villeneuve-d'Ascq.


Within days of the announcement of the NYC Bikeshare program, Chicago, Illinois issued a Request for Proposal (RFP) for a 3,000-bike system to be operational by June 2012. This RFP has a very aggressive time table to put Chicago's system on the ground close to the time of New York City's. Chicago wants to increase the size of its system to have 5,000 bikes in 500 stations within 24 months of operation. It will be entertaining to watch this bicycle race between these two cities.


November should bring two new bike-sharing programs to the United States. Broward B-cycle serving Broward County, Florida, which includes Fort Lauderdale, is readying around 200 bikes to give south Florida its second bike-sharing system. Chattanooga, Tennessee is also readying  Bike Chattanooga to launch with 300 bikes throughout 30 stations. We hope that more southern cities in the United States will not be very far behind.