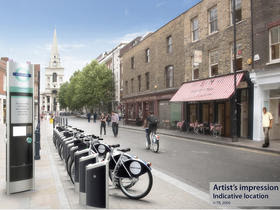 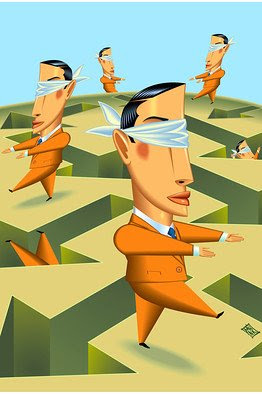 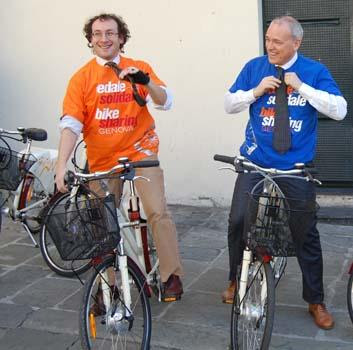 Update: Xavier B. informs The Bike-sharing Blog that Parma, Italy and Segovia, Spain incorporated electric-assist bikes on a limited basis.
Posted by Paul DeMaio at 9:31 AM No comments: Labels: bike-sharing, Genova, Italy, MoBike 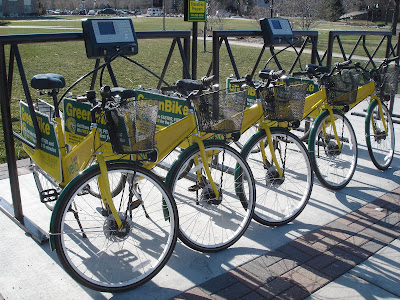 Students, faculty, and staff are enjoying the use of 60 bikes at the 14 stations. The University's RFID value-added card allows use of the system. The first 15 minutes are free and each additional 15 minutes cost $0.60. Though a small closed system (i.e., it's not available to others outside of the university), it is a real advance for bike-sharing in North America. It’s also the first system in the United States for Veloway a subsidiary of Veolia Transportation.It takes college campus bike-sharing into the big leagues.

For a picture of the system see the Bike Share Philadelphia photo album.

Is it Lockup or Lockout? 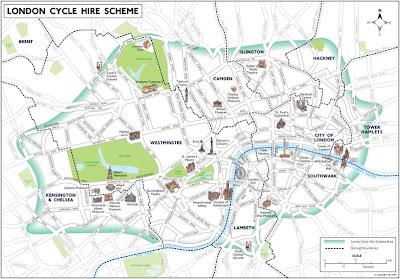 The Lord Mayor of London, Boris Johnson, has decreed the bikes in London’s 6,000 bike-sharing program, scheduled for operation a year from now, will not have auxiliary locks to tie up the bikes away from the 400 docking stations, according to Times Online. Contrary to original reports, Johnson will allow the use of a renter’s own lock, but will discourage it.

A project spokesperson said, “The use of locks will not be banned. The bikes will not have locks fitted as the purpose of the scheme is to keep the bikes in constant use so as many people as possible can use them. There will be a docking station at around every 300 metres in the cycle hire scheme area, so people who want to use or lock up the bikes will not be more than 150 metres or a two-minute walk from a docking station at any time.”

The Bike-sharing Blog wants to know what you think. Should all bike-share bikes come with auxiliary locks or should the user be totally responsible? Please use the comment link below. We want to hear from you.

The New York Times has reported today that Google has stepped into the bike-sharing arena as the provider of its 74,300-bike beta service in New York City. This program is more than two times larger than the nearest fleet size in the world. Following the naming lead of other popular programs such as Vélib’ and Velo’v in France, Google has named their program “Veloogle".

Veloogle stations are at every corner in chic neighborhoods, every third corner in up-and-coming neighborhoods, and other communities will maybe get a station sometime in the distant future.

All stations are uniquely powered with an infinite resource - waste cooking oil. Rather than solar power, which would be limited due to the city’s high skyline blocking solar rays to the street, nearby restaurants can pour their waste cooking oil into a compartment on a station’s kiosk and a chemical metabolizing agent breaks the oil down, creating energy, while also disposing of the waste oil in an environmentally friendly method. Google’s Chief of Green Operations, Alvin (Al) Goer, reports that enough energy is produced daily to power all of the 30,500 stations for the day as well as contribute 50 Megawatts of energy back to the local power grid. In other news, the local power company, con Edison, declared bankruptcy today.

To register for use of the program, one must have a Gmail account and provide their credit card number. The first 30 minutes are free and each additional 30-minute period is free too as are most of Google’s services. Already on the first day of use, there have been nearly 53,000 day, month, and year membership registrations and 431,000 trips have been made. Also, a biodegradeable helmet is dispensed for each and every trip which members may reuse or plant. An apple tree will grow from a planted helmet as a homage to the city’s nickname - The Big Apple.

With many technological advances that are pure Google, this system could be one of the very first of a 4th generation of bike-sharing programs. Veloogle’s innovations include: digital advertising on the bikes which are generated based on what the member is thinking; a global positioning system equipped on each bike that uses Google Maps to direct you to your destination via sidewalks or the sole bike lane; and a spam blocker that assists the bike dodge potholes, dog poop, and other debris.

At the launch ceremony, New York Mayor Bloomberg said, “There are two kinds of mayors: those who want bike-sharing and those who have it. I got it! So to all those who said it would never happen here, you can fuhgeddaboutit.”


April Fools! I wish portions of this were true, but it’s an April Fools joke. Hopefully, somebody at Google will read this and make the good stuff come true.