The Bike-sharing World Map has been the go-to global resource on bikeshare systems since 2007. I began the effort to document the growth of bikeshare systems back then to hasten their expansion around the world. However, the task soon became overwhelming as the number of new bikeshare services that had been launching at a frequency of once every couple of weeks grew to once each day. They were popping up faster than bikeshare trips on a free ride day with municipalities emulating each other because bikeshare is inexpensive to implement compared to other modes of transport, healthy for its customers, good for the environment, and it’s, well, cool!

As I quoted Lyon, France’s mayor in the 1/21/08 blog post, “There are two types of mayors -- those who have bike-sharing and those who want bike-sharing.” Fortunately, not long after that post, Russell Meddin joined me in curating the Map and eventually became the Map’s sole curator with a substantial time commitment over his morning coffee. Since then, the Map has grown to over 3,000 entries, painstakingly added one-by-one over the past 13 years as each unique new service develops, implements, and in some cases, permanently closes.
With Russell’s untimely passing earlier this year, a void also was created in how to keep the Map going. Due to its usefulness in spreading knowledge as its 3.5 million views would suggest, we’ve put a team together to co-curate it as no one person can match Russell’s singular herculean effort. The Map’s team includes Oliver O’brien (Europe/Middle East/Africa), Renata Rabello (Central & South America), Chumin Yu (Oceania), Rahil Gupta (Asia), Institute for Transportation Development & Policy (China), Jess Seamon (U.S. & Canada), and Paul DeMaio (Mexico).

Today, we’re excited to announce that we’re relaunching The Meddin Bike-sharing World Map at bikesharingworldmap.com. To honor Russell, we’ve renamed the new Map after him.

The features of the new Map include:

Updated entry feature of the Map 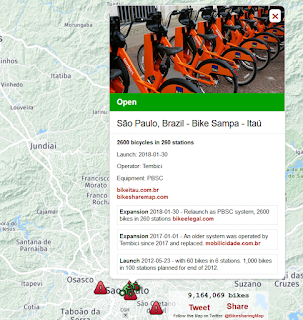 If you’re aware of a new bikeshare system or changes to existing systems, you can reach us at bikesharingworldmap @ gmail.com. The Map is a labor of love for all of our team members as we donate our time for the sake of bikeshare and to continue Russell’s decade of effort.

On behalf of our international team, we hope you like The Meddin Bike-sharing World Map.